Brad Kachelhofer with The Modern Brand Company, Dottie King with Alabama Women in Business and Melinda Sellers with Burr and Formanrhondachale
Download Audio 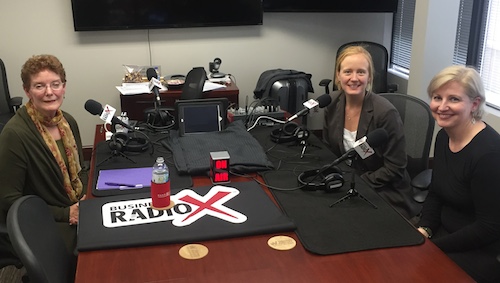 Co-founder of The Modern Brand , Brad Kachelhofer focuses on research, planning, project and production management, and copywriting. A graduate of Randolph-Macon Woman’s College (now Randolph College) with a degree in Creative Writing, Brad worked in magazine publishing and advertising for many, many years before starting The Modern Brand in 2007. Brad holds a PMP certification from the Project Management Institute.

Alabama Women in Business began approximately 25 years ago as the Women’s Business Ownership Council (WBOC), a local 501(c)6. A decade or more later, WBOC elected to affiliate with the National Association of Women Business Owners. The organization was reorganized as AWiB June 2012.

AWiB provides women entrepreneurs with opportunities to interact and to develop strategic alliances. It encourages, supports and educates women who own and operate businesses, and it seeks to improve the environment for women entrepreneurs and to foster leadership by business women in the community.

Melinda is a Partner at Burr & Forman LLP practicing in the Real Estate and Lending Practice Groups focusing on Condominium, Real Estate, and Alcohol Regulatory Law. Melinda regularly presents seminars for developers, management companies, and associations on the topic of condominium and subdivision law in Alabama, Tennessee, and Mississippi. She was also a speaker at the Craft Brewer’s Conference in 2012, 2013, and 2014 on various legal topics relevant to brewery owners and managers. In 2013, Melinda received her Cicerone Certification from the Craft Beer Institute.

Melinda is also a member of the Firm’s Hiring Committee. She has been listed to Alabama Super Lawyers as a “Rising Star” and is licensed to practice in Alabama, Tennessee and Mississippi.

She received her B.A. from Auburn University and her J.D. from the University of Alabama School of Law where she received the Thomas Wesley Martin Academic Scholarship as well as the Farrah Law Society Community Service Scholarship.