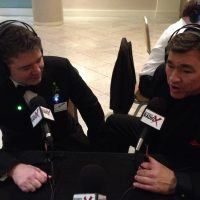 The 2013 Digital Ball is in the history books. Everyone had a great time and a lot of money was raised for TechBridge. Congratulations to James Franklin, Carrie Bates Hastings and the entire team at TechBridge along with a huge team of volunteers. This was a special night and you made it so.

Booth 61 had the privilege of broadcasting live during the opening reception. We interviewed leading technologists who have been at every Digital Ball and those who were attending for the very first time.

In addition to juggling 100 balls without letting one of them hit the ground, James Franklin, CEO of TechBridge found the time to visit us in Booth 61 at the 2013 TechBridge Digital Ball. Having known and admired James for many years, watching what he has accomplished since joining TechBridge has been nothing less than breath taking. James has assembled a team of superstars who all work for a not for profit at not for profit salaries because they care about the mission. Theses dedicated community heroes had a direct impact on over ONE MILLION PEOPLE this past year as you will hear James announce during our time together, May 11th, 2013.