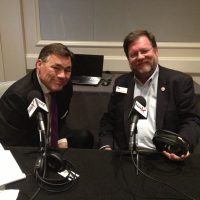 May 13th, 2013 the Atlanta CEO Council held it’s most recent gathering. Another All Star crowd of Atlanta and beyond technology superstars visited the Ritz Carlton Buckhead for the best Lamb Chops on Planet Earth. For almost 15 years the Atlanta CEO Council has created an environment where new relationships are created and deals get done. Over 150 technology entrepreneurs, angel investors, venture capitalists, professional services providers, and other VIP’s gather to do business.

This month’s program began with a presentation by Russ Clark and Matt Sanders from Georgia Tech about the project/research/commercial viability of Magic Window. After the informative presentation, everyone moved into the reception where Booth 61 was able to interview a handful of the guests. There was a lot of energy in the room and I personally wish I could have interviewed twenty more of these fine folks.

Always a pleasure and a privilege to spend time with my friend, Stephen Fleming. I met Stephen in the last 1990’s when he was a Venture Capitalist and I was a starving entrepreneur. Stephen did not invest with me but he always treated me with respect and dignity unlike many of the venture community. Stephen’s impact on our community has been huge both as an investor and as the Vice President of Georgia Tech. One of the nations top incubators is the ATDC and Stephen is expanding the operation across the state.