Our Founders:
Stephen Joseph Burke, Artistic Director. Stephen holds his Bachelor’s and Master’s degree in performance, and his Master of Fine Arts degree in Dramatics. He taught theater and performance classes at Pensacola Christian College for six years and served as the Coordinator of Productions. Stephen acted professionally in television and film before surrendering his talent to God. On the stage Stephen earned acclaim as George Gibbs in “Our Town” and Prince Albert in “Victoria Regina”. Stephen directed 18 plays and musicals; several in two of the largest performing arts Centers in the United States. The musical “The Hiding Place: Life of Corrie Ten Boom” has been the most noted of the eleven plays written by Stephen.

Alisha Burke, Assistant Director. Alisha has Bachelor degrees in Speech and Vocal Performance and a Master’s degree in Interpretive Speech. She spent four years studying voice under Ray Gibbs, formerly of the Metropolitan Opera in New York City. Alisha’s first church solo was at the age of four, since then she has continued to sing in church, recently as a featured soloist in one of the largest churches in the Southeast. Her voice is known around the world on Radio and Television. Alisha has performed in over twenty stage productions, including “Our Town” as Emily Webb, “Ruddigore” as Mad Margaret, and “The Hiding Place: Life of Corrie Ten Boom” as Corrie. She has performed recitals in the Southern US and Southeast Asia. Alisha also taught voice and performance classes at Pensacola Christian College for ten years.

Let me fully recommend the ministry of Shining Light Players. Both our church and school ministry have benefited from the time and talent these players have invested. When we hosted “The Hiding Place” the altars were full before I could finish the invitation. At our school, several students made life changing decisions after a special presentation. I’m thrilled these servants have stepped out and surrendered in this area of ministry. We anticipate having them back on a regular basis. What a blessing to the local church! Pastor Joe Shakour- Tabernacle Baptist Church Wilson, NC

Praise the Lord for the Shining Light Players. The Gospel of Jesus Christ was presented in a passionate way through the tools of music and drama. If your ministry is looking for a refreshing way to challenge and encourage your people with a message that can change lives forever please consider the ministry of Stephen and Alisha Burke. – John Williams, Associate Pastor, Beacon Baptist Church – Raleigh, NC

Stephen and Alisha love The Lord Jesus Christ and desire to serve Him through the gifts they’ve been given; namely, drama and music.  The word “drama” is often equated with Hollywood or Broadway type performing.  You never need fear that type of performance from the Burkes.  You can expect a Spirit-filled, Bible-based performance that is pleasing to God and edifying to the Church.  Our Church family was blessed by their ministry and yours will be to.  I heartily recommend them to you! — Rhonda Autrey, Performance Possibilities 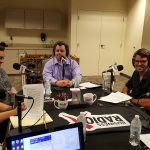 This show is brought to you by Lila Davidson Enterprises