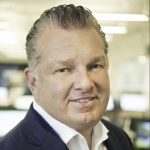 Over the past two decades, Lance Tyson has followed his passion for developing strong business leaders and their salespeople by tapping into his natural ability to connect with people and foster an environment for learning and coaching.

As President and CEO of Tyson Group, Lance facilitates, trains, and conducts over one hundred workshops annually in areas such as leadership, performance management, sales, sales management, customer service, and team building.

In 2010, Lance sold his interest in Dale Carnegie and formed PRSPX in Dublin, Ohio, to help clients build an effective sales ecosystem. PRSPX was restructured as Tyson Group in 2018 in order to provide services to assess sales teams, diagnose their needs, and equip them to be better salespeople and leaders. Lance now focuses on the mission of Tyson Group: to coach, train, and consult with sales leaders and their teams to compete in a complex world.

Lance currently lives in Dublin, Ohio with his wife and three sons.