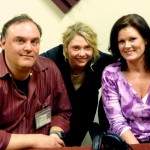 Dr. Marshall Nash is the founder and CEO of Neurostudies.net.  Dr. Nash is also Director of Stroke and Neuroscience Research at Gwinnett Medical Center.  His work focuses on cutting edge research around Stroke, Alzheimers, Parkinson’s diseases.  Dr. Nash became interested in medicine, particularly neurology, as a teenager when he was called in by one of the doctors to observe memory loss in one of his grandparents.  Now, he offers research treatments to many who might otherwise have no hope of relief from their disease.  Dr. Nash and his team can be reached at either 404-475-0552 in Decatur, or in their Lawrenceville office at 770-339-3312.  You can also visit their web site:  www.neurostudies.net.

Kiva Schindler began her career in healthcare working as an emergency room nurse.  During her tenure in the ER, she saw how critical timing was in treating stroke victims.  While still at Dekalb Medical Center, she met Dr. Nash.  Today Kiva is the Site Director for Neurostudies.net, managing nine research coordinators and five other staff members.  She is passionate about educating families about the importance of quickly recognizing signs of stroke and getting expert treatment within the first three hours after the stroke occurs.

Though one of the newer members of the team, Corie Lynn brings anotherimportant dimension to the Neurostudies team.  She is their Recruitment Specialist, and is charged with educating and advising families and patients that might benefit from the new treatment options being made available through the group’s reasearch work.  Corie is well prepared for this position, having earned a BS degree from Seton Hall, and working on both sides of the research fence, first at Merck, then at the University of South Carolina.  Corie and Kiva can also be reached at the numbers listed above.