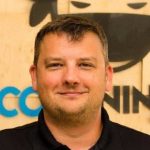 David Graham is CEO and Co-Founder of Code Ninjas®. Code Ninjas® is the world’s largest and fastest-growing kids coding franchise, with hundreds of locations in the United States, Canada, and the United Kingdom.

At our centers, kids learn to code while building their own video games. They gain problem-solving, critical thinking, and STEM skills in a fun, safe, and inspiring environment.