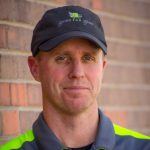 Reid Husmer graduated from the University of Denver with a Bachelor’s degree in International Business and a minor in Spanish. Reid worked for several years in the software and hardware sales industry.

Wanting to do something different, in 2008 he started an eco-friendly hauling company out of his house in Centennial, Colorado. When the house started overflowing with stuff, Gone for Good opened up a thrift store in 2010 in Littleton, Colorado. In 2013 items started to overflow in the parking lot and it was time to move to Denver.