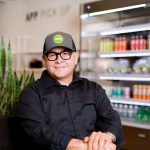 Mijo Alanis opened the first Beyond Juicery + Eatery in 2005 alongside his wife, Pam Vivio, after working in the restaurant industry for many years.

The couple founded the fast-casual concept in response to seeing how customers’ needs were changing. They noticed that people began to trade fries for salads and knew they could create a business to fill the void of healthy food options in Michigan.

With more than 25 restaurants open across the Midwest, Mijo is committed to growing the Beyond Juicery + Eatery brand while maintaining the brand’s commitment to “be the best part of someone’s day.”