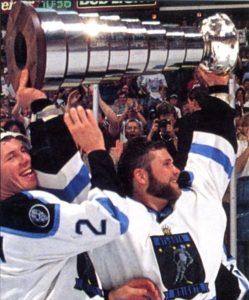 From this excerpt from “Gwinnett Business Radio” on Business RadioX, Craig Jenkins shares the news about a 25 Year Anniversary of the Atlanta Knights 1994 Turner Cup Championship and plans for a reunion on the weekend of October 18-19, 2019.

About the Atlanta Knights

The Atlanta Knights were a minor league hockey franchise that played at the Omni Coliseum from 1992 through 1996. The arrival of the Knights marked the return of pro hockey to Atlanta for the first time since 1980, when the NHL’s Atlanta Flames departed for Calgary. The Knights served as the top farm club to the NHL’s Tampa Bay Lightning. In 1994, the Knights won the International Hockey League (IHL) championship, the Turner Cup.

2019 marks the 25th Anniversary of the Turner Cup championship team. Fans are encouraged to join former Knights’ players, coaches and staff in a 25-year celebration and reunion at the Atlanta Gladiators home game on Saturday, October 19.

In addition to the Atlanta Gladiators game, other weekend festivities are being planned. For more information and updates, visit the Atlanta Knights Facebook page.