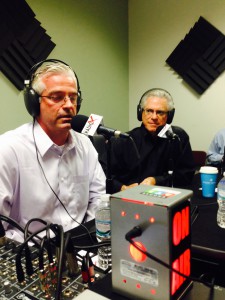 According to CDC, there were over 700,000 hospital acquired conditions in 2011 (in this case, infections).  When you add those numbers to other preventable situations such as falls, wrong drug/dose/patient, and others, it’s clear that hospitals can be potentially-dangerous places.  This week, Diana and I sat down with two experts from companies that are tackling this problem from different directions.

HanGenix, an Atlanta-based start-up is developing an innovative technology that employs ultrasound transmitters/receivers on soap dispensers, on the clinicians’ badges, and in the patients’ rooms with the goal of increasing compliance with hand-washing standards.  CEO, Jeff Kline, talked about how each patient bed is “guarded” by an ultrasonic receiver that communicates with the clinician’s badge and soap dispenser in the room or nearby.

The system starts a clock that will alert the health worker that they need to re-wash their hands if too much time elapses between washing their hands and touching the patient.  The bed’s zone receiver also prompts an audible alert on the worker’s badge if they approach the patient’s bed without having registered a hand-washing event detected by the system.

Early returns from health systems that are participating in the testing of the prototype have shown that hand washing compliance is as low as 40% before implementing the technology and rises rapidly once it is deployed.  This is significant, as hand-washing has been identified as one of the most effective means to prevent spread of infections from patient-to-patient in a healthcare environment.

Synensis’s Chief Innovation Officer, Rick Stone, joined the conversation to talk about how their company works with their healthcare clients to assess the organization’s internal culture relating to behaviors that reduce hospital acquired conditions such as falls, infections, and other sentinel events.  Through an in-depth assessment at the outset of their engagement, Synensis’s team formulates a picture of how an organization prioritizes policies/procedures that can reduce/prevent those sentinel events.

The company then begins to interface with all levels of leadership and front-line providers to raise awareness and put in place actions such as debriefings after untoward events occur so that better team work can result.  Synensis also helps hospitals identify areas of their organization that have particularly low rates of sentinel events to draw from their localized culture/approach to prevention to the betterment of the organization as a whole.  As Rick stated, “Hospitals have teams of experts.  But, few have expert teams,” pointing out that in many industries, healthcare included, poor communication and/or teamwork is the primary culprit in accidents.

This program made possible by: