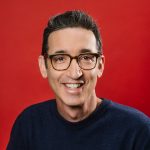 As a Principal and a Director at Bottle Rocket Media, Dan Fisher is excited to be able to combine his years of experience as an Editor, a Producer, a Director, and a Photographer to create content across many platforms.