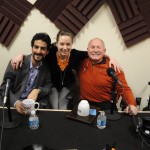 On this Episode of Meeting Pros:

Omer Dar was born in Jerusalem, Israel. Surrounded by an entrepreneurial atmosphere (after all it is a “Startup Nation”), he started doing small businesses since he was 12.

During his time in the army he commanded an infantry unit and learned the value of leading as opposed to commanding. After his release, he went for a long backpacking trip the world over and visited over 10 countries in 2 years. He learned new cultures and the differences in the ways those cultures interact with each other.

It was only natural for him to decide to study for his bachelor’s degree while in Europe. While studying he worked for a multinational pharmaceutical company but after 2 years, deciding he wanted to do it his own way, and established his first company, a bio-tech company. In the same year he also established a restaurant that later became a small chain.

Excelling in his MBA studies, he received a scholarship to study at Goizueta Business School (Emory). Not wasting any time, he created a wide network within the school and outside of it to prepare for the next big thing.

After establishing SocialBox with his two partners: Itai Peer and Avner Moratt, he quickly pushed forward to bring SocialBox to the attention of the big corporations. Currently working with companies such as Sun Trust, Kinder Care and Philips Arena.

From coordinating the initial graphics piece to designing your wedding look and creating the balanced menu design complete with transportation, entertainment and custom event rentals; Tim’s event expertise will be you’re biggest advantage.

Mr. Lundy is an international professional speaker on the subjects of Culinary Design, Event & Wedding Planning, and Event Design & Décor for the Association of Bridal Consultants, The Special Event, American Rental Association, International Caterers Association, Event Solutions Expo and International Special Events Society. Tim has produced his first published book called, “Inside the Recipe Box of the Catering Chef”, which was launched February 2009 in Las Vegas at the Catersource Conference.

In 1988, when Tim Lundy, CSEP, first envisioned the Allie Awards, those were the guiding principles he had in mind. He knew the city of Atlanta was fast becoming one of the stars of the event industry and wanted to create a platform for the local event industry to not only showcase their talents, but also drive them to produce events that could compete on national and even global levels.