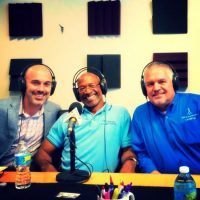 Emma shared some upcoming events hosted by AGLCC, including the Procurement Expo held 5/23, where entrepreneurs can learn about the procurement process around supplier diversity that, should they obtain certification as LGBTBE’s, can truly help them grow through those supplier relationships.

Carlton Brown has been providing catering services for over 24 years in the Atlanta area.  He learned how to cook when he was in his 20’s coming out of the military.  He decided to go to culinary school to learn while working in corporate jobs.  He explained he was pulled into the catering business somewhat by accident, when a friend asked if he would prepare some food for a party.  He was called with inquiries about providing catering services by guests who had attended the event.

From there his business continued to grow by word of mouth and he ultimately decided to leave the corporate world to be a full time caterer running his own business.  We talked about how he enjoys the way the catering business flows over the challenges of having a brick and mortar restaurant.  Carlton also explained how he had to learn how to market his business and the value of networking, which was aided greatly through his involvement with the AGLCC.

TP Corporate Lodging was founded when Tim Miller purchased the firm and ultimately changed the name after having worked with the company for a number of years.  He explained the name was inspired by his childhood goal of having a chain of “TP Inn’s”, named after his name, Timothy Paul.  He worked in the hotel business for a period of time and learned of the challenges and stresses around it before going to work in the corporate housing space, where he found he enjoyed the business model.

The company provides executives and other individuals/families who need a nice, furnished home for a period of time that exceeds what a hotel’s cost would reasonably bear.  Tim explained that they have housing options that span the range of upper-middle to high end apartment residences, both in-town and in the suburbs, depending on the needs of the clients.

He talked about the fact that this type of housing is frequently utilized by the movie industry, giving him the opportunity to have provided residences for several well-known celebrities.  Tim is also an AGLCC member and shared the fact that  his experience as a member has also provided relationships that have helped his business grow.

Jack Kinley founded Lab Monkey, a creative consultancy, helping to craft and share a business’s story effectively, primarily with their internal clients across large enterprises.   The name was a college nickname he earned in college, working all-nighters in the computer lab.  He enjoyed the free-spirited, creative environment of his experience in college working on various projects and thought it would be a name that was both interesting as well as representing the dynamic of his firm.

The company hires high-level executives who are still interested in working.  They leverage their experience and credibility to serve the needs of their clients (typically businesses with 1000 employees or more) to effectively identify and share their stories with the employees who work for them to increase engagement and buy-in with the brand.

Jack is also the incoming President for AGLCC and explained his involvement with advancing the AGLCC’s ability to increase awareness of the organization to the community.  Having gotten to work so closely with the executives through the process, which was actually done through an engagement with Lab Monkey, he was inspired to become part of the leadership team himself.