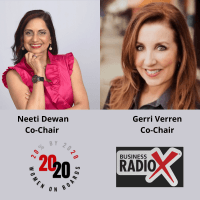 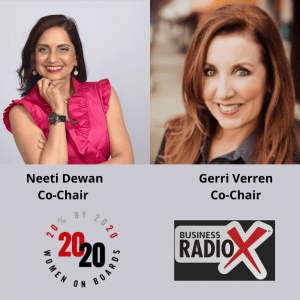 Neeti Dewan and Gerri Vereen, Co-Chairs of 2020 Women on Boards Atlanta, join host John Ray to discuss their organization’s objective to increase the proportion of women on corporate boards, why it matters, and a special event for Atlanta-area companies and women on December 4, 2020. North Fulton Business Radio” is produced virtually from the North Fulton studio of Business RadioX® in Alpharetta.

Co-Founders Stephanie Sonnabend and Malli Gero wanted to create a grassroots campaign to raise awareness of the issue of women on boards among young people, middle managers, senior executives, and consumers—people who probably had not previously thought about its relevance to their lives and jobs. They wanted to enlist them as champions through the use of social and traditional media. From that concept, the campaign expanded to involve corporations throughout the country.  They tracked the lack of women on boards through in-depth research, and spawned major public events in key cities to educate women at all stages of their careers about getting on boards.

They believe their goal would be easily achievable in ten years: to raise the percentage of women on U.S. corporate boards to 20% or greater by the year 2020. The campaign expanded nationally in 2011.

Continuing to grow in size and influence over the years, 2020WOB built an army of active volunteers and supporters who continue to propel the campaign forward.  When the milestone year 2020 is reached, there will be a new name, a new goal, and renewed focus to add more women on corporate boards.

Numerous independent research studies have shown that public corporations with women on their boards out-perform boards with only men, as measured by profitability, productivity, and workforce engagement. Corporations are in business to grow, provide jobs, and generate profits, so adding the talents and experience of highly qualified women directors provides a competitive advantage. For the first time in history, institutional investors with trillions in assets are holding back their support when a corporate board has no women directors. A number of states have passed, or are considering, laws related to diversity on boards because it makes logical business sense for their state economies. In 2018, California was first in the U.S. to pass the historic law requiring corporations to add specific numbers of women directors within three years.

It’s About Career Advancement for Women

Historically, the corporate boardroom and top C-Level positions (CEO, COO, CFO, CMO, CIO, etc.) have been off-limits to women.  Generations of women have worked hard to advance in their careers, only to be stopped at the boardroom door. Serving on a corporate board is generally recognized as the pinnacle of business success. There’s a higher level of social esteem and business respect that comes from serving on corporate boards, as well as paid compensation. Board members themselves become more well-rounded executives.  Women deserve to benefit from board service, just as men have for decades.

Today’s corporations must address issues of pay disparities, sexual harassment, and discrimination against women that have diminished corporate and individual reputations as well as public trust in their brands. Having women on boards is a step toward gaining, regaining, or maintaining a positive workplace for women. When women directors serve on boards, women employees look up to them as role models, reinforcing that the company values and recognizes the contributions of women at all levels.

European countries were the first to mandate minimum requirements of women directors. Their targets of 30% and 40% have been achieved and are considered normal now. In 2019, US companies exceeded 20%. Well-qualified women throughout the world are seeking and serving on corporate boards, to the advantage of enlightened corporations. Now is the time to welcome women to boards, adding their voices to business leadership in the U.S. and the world.

North Fulton Business Radio” is hosted by John Ray and produced virtually from the North Fulton studio of Business RadioX® in Alpharetta. You can find the full archive of shows by following this link. The show is available on all the major podcast apps, including Apple Podcasts, Spotify, Google, iHeart Radio, Stitcher, TuneIn, and others.

In addition to operating the North Fulton studio of Business RadioX®, John Ray is the owner of Ray Business Advisors, LLC.
Because pricing is the fastest way to change the profitability of a business, John advises business owners on how to change their pricing and make more money. His clients include attorneys, CPAs, consultants, technology companies, and retail store owners.
His blog, “The Price and Value Journey,” regularly features examples and stories which help business owners in their own pricing journey. John is also a speaker on pricing at numerous chambers, business events and seminars. John also helps small to mid-sized companies achieve their profit and growth goals as an outside CFO.
John is extremely active in the North Fulton community. He is on the board of the Greater North Fulton Chamber of Commerce (GNFCC), and serves in a variety of capacities there, including Chairman’s Circle, member of the Finance Committee, and co-chair of the Awards Committee. John was named the 2018 Harry Rucker Jr. Volunteer of the Year by GNFCC.
In 2011, John founded Backpacks of Love, a grassroots, all-volunteer organization which serves children and their families in the north metro Atlanta area who are homeless or otherwise in severe need. Backpacks of Love delivers backpacks of food, purchased and packed by volunteer sponsors, to 18 different elementary, middle, and high schools in north Fulton County and Forsyth County.
In 2015, John was named Small Business Partner in Education of the Year by the Greater North Fulton Chamber of Commerce for his work with Backpacks of Love.
John is a Deacon in the Episcopal Diocese of Atlanta and is currently assigned to Holy Comforter Episcopal Church in Atlanta.