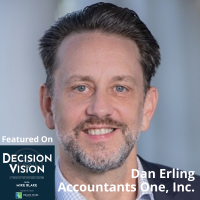 Decision Vision Episode 125:  Should I Take Over the Family Business? – An Interview with Dan Erling, Accountants One, Inc.John Ray
Download Audio 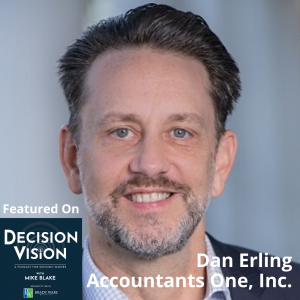 Decision Vision Episode 125:  Should I Take Over the Family Business? – An Interview with Dan Erling, Accountants One, Inc.

Dan Erling became CEO of Accountants One suddenly when his father died in 2010. As the sales director, Dan was embedded in the business but without a plan to take over. He and host Mike Blake chart the course of Accountants One from that point, and Dan shares his insights on what it takes to inherit a business, lucky breaks, things he would have done differently, how the business eventually flourished, and much more. Decision Vision is presented by Brady Ware & Company.

Accountants One is a full-service accounting and finance recruiting firm specializing in direct hire and contract placements. 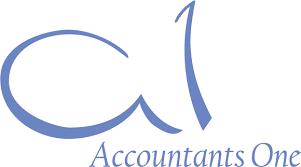 Since 1973, they have been recognized as industry experts who align as trusted staffing partners with the organizations we serve. Their relationship-driven focus consistently leads to the highest rate of placement success in the industry. Headquartered in Atlanta, Georgia, Accountants One has the infrastructure in place to serve clients across the Southeast.

The CEO of Accountants One, Dan Erling, wrote the book on hiring – literally.  The book is called MATCH: A Systematic, Sane Process for Hiring the Right Person Every Time. The book details uniqueness of our approach.

Key points include:
Recognizing that a great hire is 75% culture fit, 25% skill fit. What this means for you: they get to know you and the unique culture of your company. They find candidates who not only have the right skills, they are also the right fit for your department and company.

Finding the right person requires a coordinated project management team. What this means for you: evaluating stacks of resumes, interviewing candidates, testing them, checking references, preparing them, following up – they utilize an entire team to work on your job order.

Understanding that mis-hire can cost a company up to 15 times their salary. What this means for you: they’re objective. They get to know you, and they know their candidates. They’ve interviewed thousands of people. They’re not fooled by someone who is great at interviewing but doesn’t have what it takes to work for your company. They have the highest success rate in the industry for a reason: they have the tools to match candidates with clients.

Working a consistent, proven process ensures success. What this means for you: the right process allows them to move forward methodically and ensures that all the angles are covered, so by the time the candidate gets to you, there are no surprises. No one ‘slips through the cracks.’

Developing meaningful long-term relationships with both clients and candidates makes the difference. What this means for you: They invest in getting to know you so that they can understand the intangibles – those qualities that go beyond an email or job write-up. They are your partner. They are with you for the long haul.  They develop the same deep relationships with our candidates; they have access to excellent people who work with them exclusively and confidentially on their job search.

Dan Erling is the President of Accountants One. He is in the Georgia Association of Personnel Services (GAPS) Million Dollar Hall of Fame and was recognized as one of Atlanta’s Up and Comers by the Atlanta Business Chronicle. Under Dan’s leadership, Accountants One was named one of Atlanta’s Best Places to Work. Dan is the creator of the Search for the South’s Funniest Accountant. This combination fundraiser/stereotype debunker has become an annual favorite in the accounting community – consistently bringing in over 800 people to cheer for Funny Accountants. Through the Search Accountants One has helped raise over a quarter of a million dollars for Junior Achievement of Georgia.

He earned a Bachelor of Science in Mathematics from Georgia State University and his Masters from Emory University. Before joining Accountants One, Dan was an inner-city math teacher for 8 years. In 1996, he was named the Academic Achievement Incentive Teacher of the Year for Middle Schools. In 1998, Dan had the opportunity to join his father, Bert Erling, at Accountants One. This followed several summers of working as an IT Project Manager for the firm. While Dan unexpectedly lost his dad on May 2, 2010, he considered the opportunity to work with his dad as one of the highlights of his life.

Dan’s wife, Michelle, is an art educator and painter (she painted the two pieces that hang in the lobby of the main office). He has two sons that he is very proud of. Dan’s personal interests include abstract art and music. While dedicated to working a recruiting desk, Dan spends a great deal of time consulting with companies on Hiring Best Practices. The result of this work led to his book: MATCH, A Systematic, Sane Process for Hiring the Right Person Every Time. The book was published in December 2010 by Wiley Publishing and is available wherever books and ebooks are sold. You can learn more about Dan’s philosophy of hiring as well as read his blog by visiting www.danerling.com.

Dan is on the board of Junior Achievement of Georgia. Through this non-profit, he is able to be part of making a difference in the lives of children. Something that remains incredibly important to him. Dan is also on the board of the Georgia State Panther Athletic Committee. As a Georgia State University alum, he is incredibly proud of what is going on with Panther Sports. The impact of the sports community on the downtown area also inspires him. The opportunity to serve people and bring value in an authentic way continues to motivate and inspire Dan every day. He truly loves his job.