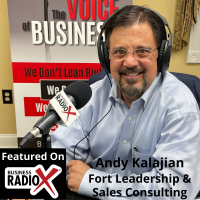 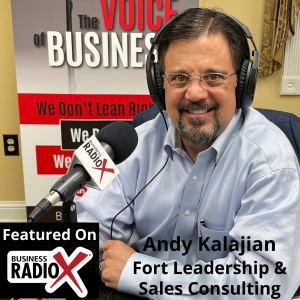 Andy Kalajian of Fort Leadership & Sales Consulting joined host John Ray to discuss his leadership and sales consulting practice, the one common character trait of all effective leaders, the biggest challenges leaders face today, and much more.  North Fulton Business Radio is broadcast from the North Fulton studio of Business RadioX® inside Renasant Bank in Alpharetta.

There is a synergy of energy, commitment, and excitement that participants bring to a mastermind group. Andy’s facilitated John C. Maxwell book study groups offer a combination of masterminding, peer brainstorming, education, accountability, and support in a group setting to sharpen business and personal skills. By bringing fresh ideas and a different perspective, Andy’s masterminds help participants achieve increased success.

As a Certified John Maxwell Coach, Trainer and Speaker, Andy offers customized presentations to fit individual or team needs and budget such as:

In individual, executive or team coaching, Andy can see what clients are going through now and what is up ahead. Coaching is foreseeing, paving the way, coming alongside a client while helping them achieve goals and overcome limiting paradigms.

Andy Kalajian has been a highly sought-after public speaker for more than 25 years. He has received public acclaim for his brand, EnTheos, Latin for Spirit Within and origin to the word Enthusiasm. Andy enthusiastically delivers powerful talks and lessons steeped in the wisdom literature and their practical application into busy lifestyles. His tagline, transformational thought in action, serves as a reminder to the participant that one can, indeed, permanently change the destiny of their life by changing the nature of their thoughts and actions.

Andy was born and raised in Detroit Michigan. As a young boy he discovered his passion for serving others in medicine and his gift for public speaking. At the age of 12, Andy, at the urging of his father, began to earn his own way as a Golf Caddy. His sense of adventure also led him, along with his father, to the Boy Scouts of America where he achieved the rank of Eagle Scout. In High School, Andy’s mother introduced him to the books Think and Grow Rich by Napoleon Hill and How to Win Friends and Influence People by Dale Carnegie.

While a golf caddy, Andy was awarded the prestigious Evans Scholarship, a full academic and leadership scholarship, to study at Michigan State University, where he earned a Bachelor of Science degree in Medical Technology. In 1985, he coupled his lifelong passion for medicine and serving people with his gift of enthusiastic speaking and moved to Atlanta to begin his career in Medical Sales. As a young professional, Andy’s mom continued to fuel his desire for wisdom literature from authors/speakers Zig Ziglar, Earl Nightingale, Les Brown, Stephen Covey, and John Maxwell. Andy applied the character traits instilled in him from the Boy Scouts and the leadership skills taught to him by John Maxwell, Stephen Covey, and others to enjoy over 30 years in an award-winning medical sales career.  It was during this time that Andy was asked to speak to groups as small as 4 or 5 and as large as 500+ all over the US and Puerto Rico.

Andy and his wife, Sherrie, have four adult children and are active members of Pastor Andy Stanley’s congregation at North Point Community Church in Alpharetta, Georgia. Andy enjoys time invested with his wife Sherrie, his family, and friends.

Questions and Topics in This Interview