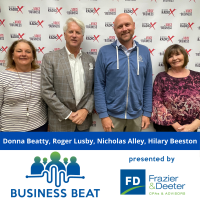 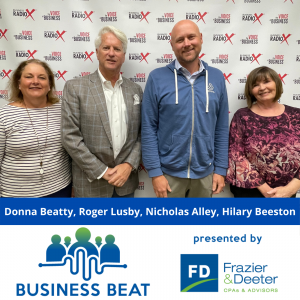 Dr. Nicholas Alley and Hilary Beeston, Co-Founders of Area-I, joined Frazier & Deeter’s Roger Lusby and Donna Beatty to discuss the keys to their successful work in Unmanned Aerial Systems (UAS). Nick and Hilary shared their backgrounds, how Area-I got started, challenges of working with the federal government, why UAS are so important, how they’ve created an attractive working environment for their team, and much more.  Business Beat is presented by Alpharetta CPA firm Frazier & Deeter.

Founded in 2009, Area-I has spent over a decade developing a unique and innovative aerospace company that delivers tangible results, while providing a fun and creative environment for our employees to thrive.

Area-I, Inc. is a metro-Atlanta-based Aerospace company dedicated to the development of state-of-the-art Unmanned Aircraft Systems (UAS). They specialize in the design, prototyping, optimization, integration, flight controls, and flight testing of unmanned systems from initial concept to demonstration. Area-I is quickly becoming known for the go-to source of Tube-Launched, Tube-Stored aircraft, such as its ALTIUS platform. ALTIUS offers unrivaled endurance and payload capacity in its size class. Some of Area-I’s current customers include the U.S. Air Force, SOCOM, U.S. Navy, U.S. Army, and NASA.

Dr. Nicholas Alley and Hilary Beeston cofounded Area-I in 2009.  Hilary took on the role of CFO and her work has been key to navigating Area-I’s business with the federal government.

Dr. Nicholas Alley received his Ph.D. in Mechanical Engineering with an emphasis in fluids and flight mechanics from Utah State University in 2006. Studying under Dr. Warren Phillips, he gained a background in aerodynamics and flight mechanics. While at USU, Dr. Alley was involved in the design and construction of five unmanned aircraft and was the chief engineer and faculty advisor for the student-designed USU Wright Flyer, which successfully flew at venues all over the nation in celebration of the centennial of flight.

After graduation, he spent a year at the Idaho National Laboratory (INL) where he developed and deployed unmanned aerial vehicles to aid in the protection of INL’s nuclear facilities. In the fall of 2007, he took a research faculty position in the Aerospace Engineering department at the Georgia Institute of Technology where he was the instructor for the unmanned aircraft design class and the faculty advisor for Georgia Tech’s AIAA design-build-fly student teams.

Dr. Alley left Georgia Tech in January of 2009 and founded Area-I, Inc., an aerospace technology firm in the Atlanta area that specializes in the development of unmanned aircraft systems (UAS). Since 2009, Area-I has grown to over 100 personnel, received nearly $100 million in government and private contracts, and is actively engaged in developing UAS, and UAS-related technologies for the Air Force, Navy, Army, and NASA.

At Area-I, Dr. Alley continued his tradition of aircraft design by utilizing his software tools, which can quickly and accurately predict aircraft performance, to lay the framework for a company that has since established a reputation for designing highly engineered, mission-specific unmanned aircraft. Area-I is currently leading the development and testing of new unmanned aircraft for the Air Force, Army, and Navy as well the autonomy that allows those aircraft to carry out highly specialized missions with minimal operator oversight. Area-I’s primary platform, ALTIUS, is a high-endurance fixed-wing aircraft that folds up such that it fits into a specialized launch tube. ALTIUS is then carried aloft, launched, and controlled from a mothership, such as the AC-130 gunship, the UH-60 Blackhawk, or the NOAA P-3 hurricane hunter.

Roger Lusby, host of Frazier & Deeter’s Business Beat, is an Alpharetta CPA and Alpharetta Office Managing Partner for Frazier & Deeter. He is also a member of the Tax Department in charge of coordinating tax and accounting services for our clientele. His responsibilities include a review of a variety of tax returns with an emphasis in the individual, estate, and corporate areas. Client assistance is also provided in the areas of financial planning, executive compensation and stock option planning, estate and succession planning, international planning (FBAR, SFOP), health care, real estate, manufacturing, technology, and service companies.

You can find Frazier & Deeter on social media:

An episode archive of Frazier & Deeter’s Business Beat can be found here.