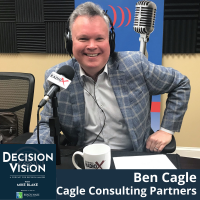 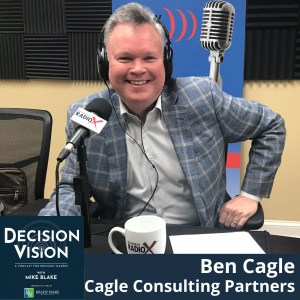 Decision Vision Episode 152:  Should I Become a Consultant or Freelancer? – An Interview with Ben Cagle, Cagle Consulting Partners

With corporate employment in constant flux, executives tired of the corporate life often set up their own independent consulting practice. Host Mike Blake spoke with Ben Cagle, managing partner of Cagle Consulting Partners, about the process of becoming an independent consultant or freelancer. Ben discussed his journey, how to get that first client, networking and marketing, the challenges unique to consulting, and much more. Decision Vision is presented by Brady Ware & Company.

Prior to founding CCP, Ben served as a Division President for a Global 100 Enterprise. Ben had P&L responsibility for a global business unit (several $ hundred million in revenue) and was on the core team leading an industry consolidation initiative (with McKinsey & Company).

Ben is an Alpharetta, Ga. native and currently resides in Alpharetta with his wife, Sara. He graduated of the Georgia Institute of Technology, is active in various Technology and Start-up organizations, and currently serves as the Chairman of Tech400 (sponsored by the Greater North Fulton Chamber of Commerce).