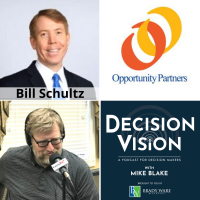 Decision Vision Episode 118: Should I Hire Someone with a Disability? – An Interview with Bill Schultz, Opportunity PartnersJohn Ray
Download Audio 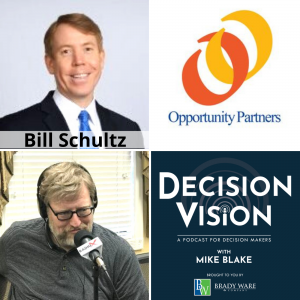 Decision Vision Episode 118:  Should I Hire Someone with a Disability? – An Interview with Bill Schultz, Opportunity Partners

In a conversation with host Mike Blake, Bill Schultz, CEO of Opportunity Partners, demystifies misconceptions businesses have about hiring people with disabilities. He explains why so many businesses, once they get past those misunderstandings and bring on someone with a disability, often expand such hiring. Decision Vision is presented by Brady Ware & Company.

Established in 1953, Opportunity Partners is a Minnesota nonprofit organization that works alongside people with disabilities to provide job training, employment, and residential support for people to live more independently, succeed on the job and lead lives filled with purpose and meaning.

Opportunity Partners serves people with many different types of disabilities. Some examples include Autism Spectrum Disorder, Asperger syndrome, brain injury, Down syndrome, cerebral palsy, Fetal Alcohol Syndrome, and many others.

Bill came to Opportunity Partners with more than 20 years of experience in a variety of business leadership positions and was drawn to the organization for its strong mission and history of making a difference in the community.