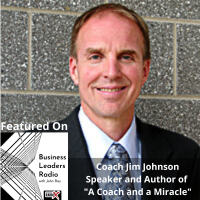 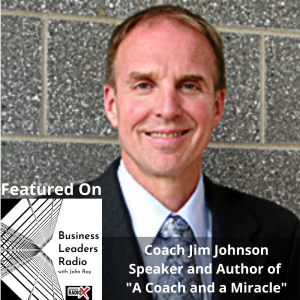 Business Leaders Radio is produced and broadcast by the North Fulton Studio of Business RadioX® in Atlanta.

Over 30 years of experience developing winning high-school basketball teams, including 428 career victories, sets the stage for the unique credibility and power of Coach Jim Johnson’s message.

Many speakers talk about leadership, but it’s rare to find a speaker who has, quite literally, lead thousands.

Based on what transpired in a few short moments in early 2006, Coach Jim Johnson is now an authority on the subject of realizing your dreams. In his many public-speaking appearances, the Rochester, New York resident relates his role in a basketball game that got Hollywood calling. He also emphasizes the importance of teamwork and sportsmanship, delivering his talks with a heartfelt style that has brought audiences to their feet.

Coach Johnson has developed winning high-school basketball teams for 30 years, taking over three losing varsity programs and turning them into winners in short periods of time. Of his 428 career victories, one, in particular, will surely never be duplicated.

On Feb. 15, 2006, Coach Johnson made the kindhearted gesture of inserting his autistic manager, Jason McElwain, now known to the world as J-Mac into Greece Athena High School’s final home game, which the Trojans won 79-43. J-Mac scored 20 points in just over four minutes, including six three-point baskets, to become an instant national celebrity. Coach Johnson, also, was featured in major news outlets around the country. 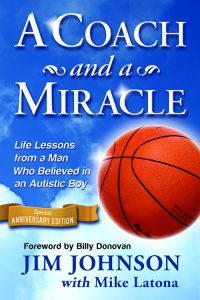 That one victory continues to reverberate into countless lives as audience after audience is touched by a wave of courage and tenacity and witnesses what true leadership can accomplish.

Coach Johnson is the author of “A Coach and a Miracle”, available here.

Business Leaders Radio is hosted by John Ray and produced virtually from the North Fulton studio of Business RadioX® in Alpharetta.  The show can be found on all the major podcast apps and a full archive can be found here.