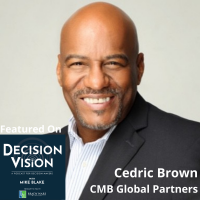 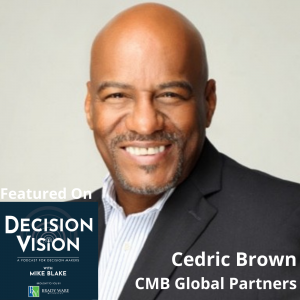 Cedric Brown, Founder and CEO of CMB Global Partners, is a leading expert in lean management. Cedric joined host Mike Blake to discuss the origins of lean management, its core principles, signs a company may benefit from lean management, why and how lean management engages every aspect of the organization, and much more. Decision Vision is presented by Brady Ware & Company.

Founded in 2013, CMB Global Partners connects clients to the best Lean and Six Sigma experts in the world.

They offer a blended learning model including boot camps, simulations online roadmaps, and hands-on consulting proven to drive significant sustainable business impact. Whether you are starting the journey or need to accelerate your transformation contact them today to learn about exciting new products and services they are developing with their global partners to accelerate your Lean Journey.

Cedric Brown is the Founder and CEO of CMB Global Partners. He is an experienced business transformation leader with a track record of transforming value streams, business units and companies utilizing Lean Six Sigma principles and methodologies.

Cedric was trained and mentored by the original team from Japan that worked directly with Taiichi Ohno, the architect of the Toyota Production System. He has proven experience in design and implementation of an enterprise-wide lean program including full employee engagement through lean boot camps and kaizens.

Cedric has also provided consulting for clients in the automotive, health care, electronics, and clothing industries.

He learned the strategy deployment methodology directly from the architect of the Danaher Business System (DBS) and is fluent in the methodology responsible for driving industry-leading shareholder values.

Cedric has a degree from Georgia Tech and lives in Atlanta.