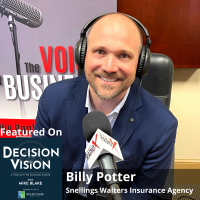 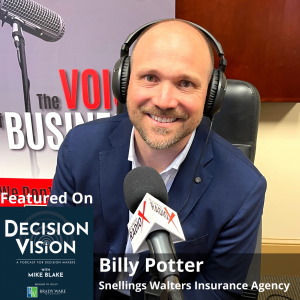 Billy Potter, CEO of Snellings Walters Insurance Agency, joined host Mike Blake to discuss the successful outcomes his firm achieved after implementing the Entrepreneurial Operating System (EOS). They discussed what EOS is, the role of values, the impact of EOS not only on the bottom line but in one’s personal life, the challenges implementing such a system brings, and much more.

Snellings Walters has been providing honest advice & protecting what you value most for more than 69 years. They are the smartest way to protect your business & family. They identify the critical issues facing your company. Survival of your business requires managing risks. In today’s environment, these risks are rapidly changing and becoming more complex. They have built a customizable platform to provide you with the security you need.

Billy Potter’s career in insurance spans more than two decades. In 2011, he joined Snellings Walters to head the Employee Benefits Division and quickly proved to be an effective consultant. His superior consultation contributed to his winning various awards within the agency, and in 2018, he was nationally recognized as “Broker of the Year” by BenefitsPRO Magazine.

His reputation as both a top consultant and engaged team leader resulted in an invitation to become an owner at Snellings Walters in 2018. As Chief Sales Officer, Potter led his team to produce record sales for the agency. The combination of his knowledge, experience, character, and passion resulted in his transition to Chief Executive Officer in 2022.

In addition to his expertise and technical know-how, Billy’s personal philosophy aligns with the core values that drive the Snellings Walters vision: engagement, accountability, curiosity, and authenticity.

By cultivating and nurturing an agency culture that allows its employees to feel empowered and supported, Billy’s mission is to inspire the next generation of successful business people at Snellings Walters and beyond.