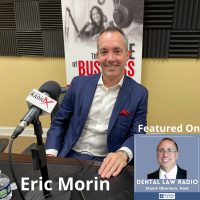 In a few years, Eric Morin argues, few dental practices will have less than $1 million in revenues. In this era of consolidation, what enables a practice to acquire other practices and scale effectively? In this conversation with host Stuart Oberman, Eric argues that the answer gets down to great employees, and he discusses the management and leadership fundamentals needed to attract those people. Dental Law Radio is underwritten and presented by Oberman Law Firm and produced by the North Fulton studio of Business RadioX®.

Eric J. Morin, Founder and CEO of Tower Leadership, is an MBA and an experienced successful financial and business consultant, Eric truly is an innovative thought leader and powerful dynamic speaker. His words compel you to grow your business, live optimally, and make a transformative impact on this world.

For over a decade, Eric J. Morin has left a successful track record in the dental consulting industry. Hundreds of Dental Practices are now thriving in wealth, work environment, and community impact.

Eric founded Tower Leadership with the sole purpose of keeping dentistry in the hands of dentists by equipping them with the knowledge and tools they need to run a flourishing practice where everyone on the team benefits.

Connect with Eric on LinkedIn. 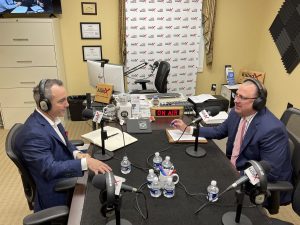 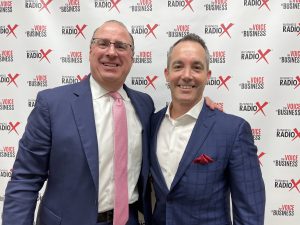 Hosted by Stuart Oberman, a nationally recognized authority in dental law, Dental Law Radio covers legal, business, and other operating issues and topics of vital concern to dentists and dental practice owners. The show is produced by the North Fulton studio of Business RadioX® and can be found on all the major podcast apps. The complete show archive is here.

Stuart Oberman is the founder and President of Oberman Law Firm. Mr. Oberman graduated from Urbana University and received his law degree from John Marshall Law School. Mr. Oberman has been practicing law for over 25 years, and before going into private practice, Mr. Oberman was in-house counsel for a Fortune 500 Company. Mr. Oberman is widely regarded as the go-to attorney in the area of Dental Law, which includes DSO formation, corporate business structures, mergers and acquisitions, regulatory compliance, advertising regulations, HIPAA, Compliance, and employment law regulations that affect dental practices.

Mr. Oberman is a national lecturer and has published articles in the U.S. and Canada.

By meeting their client’s goals and becoming a trusted partner and advocate for our clients, their attorneys are recognized as legal go-getters who provide value-added service. Their attorneys understand that in a rapidly changing legal market, clients have new expectations, constantly evolving choices, and operate in an environment of heightened reputational and commercial risk.

Oberman Law Firm’s strength is its ability to solve complex legal problems by collaborating across borders and practice areas.