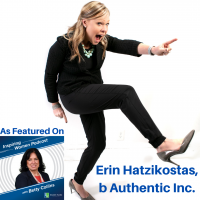 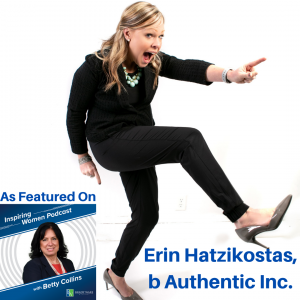 Being Authentic in Business – An Interview with Erin Hatzikostas, b Authentic Inc. (Inspiring Women, Episode 30)

On this edition of “Inspiring Women with Betty Collins,” Erin Hatzikostas, Founder of b Authentic Inc., speaks with Betty on why being authentic is a great secret weapon in business. “Inspiring Women” is presented by Brady Ware & Company.

Being authentic is a great secret weapon. A strategy.

My guest is Erin Hatzikostas, b Authentic Inc. Founder.

She walked away from being a CEO of her own company.  Urged on by a conversation, a comment, made to her by a fellow airplane passenger (you have to listen to the episode to find out what it was!).

But what we can tell you is that it inspired her to continue her professional journey, and discover that authenticity is unique. What can we do to change “the fake”, to move the authentic needle in corporate America?

To keep moving, you need to be 50% uncomfortable.

The good news is that authenticity is contagious.  We must model it when we see it, and continue to pass it along to those that follow. In her new book, You Do You(ish), she expands a very cool acronym, H.U.M.A.N.S.

And a big thanks to her for mentioning one of my past episodes, Defining Success – Does It Have To Be The C-Suite?

Erin Hatzikostas is the friend, mom, coach, guru and boss you always wanted, all rolled into one. Erin became a corporate CEO at the age of 42 — yet she smashes open the executive mold.  She is most regarded for her Midwestern-inspired, unpretentious, witty, and authentic style of leadership. She is a career coach, speaker (TEDx 2020!), podcast co-host, author, MBA, runner, wife, mom of two, and someone who is not afraid to dance in public.  ​

Erin is the living, breathing business case for authentic leadership.

​Erin spent her career “first half” working in the corporate world, where at the age of 42, she became the CEO of a $2bn healthcare financial institution. In just 3 years, she tripled earnings and sent employee engagement skyrocketing.

​And just when things were going great, she decided to walk away so that she could help solve what truly breaks her heart: the immense lack of authenticity and happiness in Corporate America.

Through her company, b Authentic inc, Erin is provoking a movement to eradicate the all-too-fake Corporate environment by inspiring and enabling an army of people to crush their career, without compromising everything else. 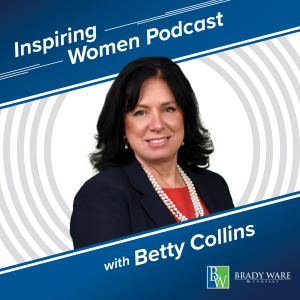 Betty Collins is the Office Lead for Brady Ware’s Columbus office and a Shareholder in the firm. Betty joined Brady Ware & Company in 2012 through a merger with Nipps, Brown, Collins & Associates. She started her career in public accounting in 1988. Betty is co-leader of the Long Term Care service team, which helps providers of services to Individuals with Intellectual and Developmental Disabilities and nursing centers establish effective operational models that also maximize available funding. She consults with other small businesses, helping them prosper with advice on general operations management, cash flow optimization, and tax minimization strategies.

In addition, Betty serves on the Board of Directors for Brady Ware and Company. She leads Brady Ware’s Women’s Initiative, a program designed to empower female employees, allowing them to tap into unique resources and unleash their full potential.  Betty helps her colleagues create a work/life balance while inspiring them to set and reach personal and professional goals. The Women’s Initiative promotes women-to-women business relationships for clients and holds an annual conference that supports women business owners, women leaders, and other women who want to succeed. Betty actively participates in women-oriented conferences through speaking engagements and board activity.

Betty is a member of the National Association of Women Business Owners (NAWBO) and she is the President-elect for the Columbus Chapter. Brady Ware also partners with the Women’s Small Business Accelerator (WSBA), an organization designed to help female business owners develop and implement a strong business strategy through education and mentorship, and Betty participates in their mentor match program. She is passionate about WSBA because she believes in their acceleration program and matching women with the right advisors to help them achieve their business ownership goals. Betty supports the WSBA and NAWBO because these organizations deliver resources that help other women-owned and managed businesses thrive.

Betty is a graduate of Mount Vernon Nazarene College, a member of the American Institute of Certified Public Accountants, and a member of the Ohio Society of Certified Public Accountants. Betty is also the Board Chairwoman for the Gahanna Area Chamber of Commerce, and she serves on the Board of the Community Improvement Corporation of Gahanna as Treasurer.