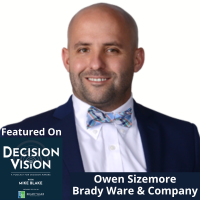 Decision Vision Episode 124: Should I Get my Old Job Back? – An Interview with Owen Sizemore, Brady Ware & CompanyJohn Ray
Download Audio 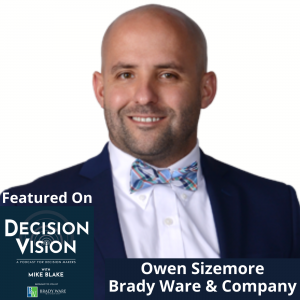 Decision Vision Episode 124:  Should I Get my Old Job Back? – An Interview with Owen Sizemore, Brady Ware & Company

Should you return to a former employer? Brady Ware’s Owen Sizemore talked with host Mike Blake about his career and the decision points along the way which led him to leave and then return to Brady Ware, how he negotiated a return, the importance of not burning bridges, and much more. Decision Vision is presented by Brady Ware & Company.

Owen is a member of the American Institute of Certified Public Accountants and the National Association of Certified Valuators and Analysts. Along with being a licensed CPA, he’s also a Certified Valuation Analyst. He obtained his B.S. in Accounting from the University of Northern Colorado and his MBA in finance from Xavier University.

Connect with Owen on LinkedIn.