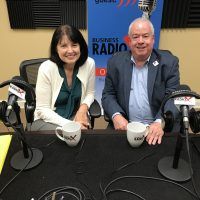 Jack Murphy and Nancy Diamond of the North Fulton Poverty Task Force discuss the rising problems of financial vulnerability, home affordability, homelessness, and hunger in North Fulton, and how those problems affect the area’s business environment. Hosted by John Ray, “North Fulton Business Radio” is broadcast from the Business RadioX® studio inside Renasant Bank in Alpharetta.

The North Fulton Poverty Task Force was formed in 2014 and emerged from an assessment conducted by a team of nonprofits, corporate and other business partners, academics, spiritual leaders and their stakeholders. Independently, and collectively, they recognized a rise in people seeking services. Most notably was an increase temporary housing arrangements following evictions and foreclosures. They realized that our collective capacity couldn’t keep up with demand. They needed to find ways engage the broader North Fulton community in a response strategy.

Hence the work of the North Fulton Poverty Task Force began, and several critical actions emerged from this leadership team. Most notably, the Task Force determined that it was critical to establish a benchmark to identify whether the discoveries in North Fulton were anomalies or are factors underpinning this shift a potential threat to the labor market and familial stability or our community. Efforts included outreach to various national agencies whose work was professionally and scientifically confirmed and could serve as a credible sources to examine the shifts in our dynamics in North Fulton.

The report that follows demonstrates that the anecdotal information first seen by independent agencies and policy makers was in fact reality and widespread. What emerged is a series of drivers that impact the creation of financial vulnerability leading to temporary housing solutions and in some cases, to homelessness. Through an economic lens, this is concerning as these residents are our employees, our neighbors and the children attend schools with ours. While NO direct solutions are advanced, this purposeful approach articulates the data discovered and presents a case for rational consideration.

For more information, go to the website for the North Fulton Poverty Task Force. You can also read and download their 2019 report, Our Invisible Neighbors: Financial Vulnerability in North Fulton, here.

Jack Murphy is a volunteer with The Society of St. Vincent de Paul and is Chair of the North Fulton Poverty Task Force. He also is in his 17th year of working for the Metro Atlanta Chamber of Commerce.

Prior to the Chamber, Jack worked for and with Fortune 500 companies in operations, human resources, training, and quality areas. Jack was a senior adjunct profession for Quality & Operations Management at Keller Graduate School for 14 years.

He has served on both the National and Georgia Boards of The Society of St. Vincent de Paul, responsible for Diversity, Advocacy, & Systemic Change. Jack currently is national SVDP chair of Systemic Change and Advocacy.

Jack received a BA in psychology from Belmont Abbey College and a MEd. from the UNC-Greensboro.  Jack and his wife Nancy, a retired elementary school principal, have two grown daughters and two grandchildren.  They live in Alpharetta, GA.

Nancy Diamond is a Project Manager with Schmit & Associates, a real estate development firm, creating town center revitalization in communities all around the metro area.

She has been active in area non-profit organizations, including board leadership positions in the STAR House Foundation, WellStar North Fulton Hospital, Roswell Rotary Club, and the North Fulton Poverty Task Force.

A native of Atlanta, and 38-year North Fulton resident, Nancy worked at Turner Broadcasting in the early years of CNN, then became a freelancer in sports television graphics. While raising her two daughters, she worked from home, first developing a corporate gift service, and later as a mortgage loan originator.

Nancy and her husband, Glenn, now relish the role of grandparents to 4-year old Owen. 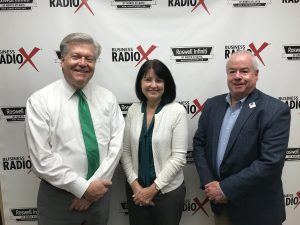 North Fulton Business Radio” is broadcast from the North Fulton studio of Business RadioX®, located inside Renasant Bank in Alpharetta. Renasant Bank has humble roots, starting in 1904 as a $100,000 bank in a Lee County, Mississippi, bakery. Since then, Renasant has grown to become one of the Southeast’s strongest financial institutions with approximately $13 billion in assets and more than 190 banking, lending, wealth management and financial services offices in Mississippi, Alabama, Tennessee, Georgia and Florida. All of Renasant’s success stems from each of their banker’s commitment to investing in their communities as a way of better understanding the people they serve. At Renasant Bank, they understand you because they work and live alongside you every day.