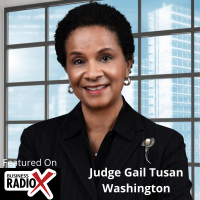 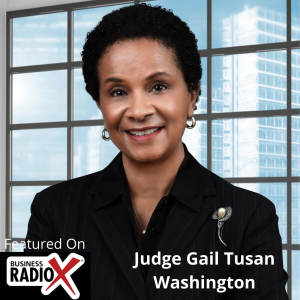 Host John Ray welcomes Judge Gail Tusan Washington to discuss her long career as a Superior Court Judge, her current practice as a mediator and arbitrator, and the creative work she’s able to pursue now that she is off the bench. “North Fulton Business Radio” is produced virtually from the North Fulton studio of Business RadioX® in Alpharetta.

Gail S. Tusan, Senior Judge, brings more than 30 years of judicial service in various Georgia jurisdictions to her practice as an Arbitrator/Mediator/Special Master at JAMS. In April 2019, Judge Tusan retired from her sixth elected term as a Superior Court Judge in Fulton County. During her time on the superior court, Judge Tusan served two successful terms as Chief Judge and played an active role in the design and launch of the Family Division, where she also served for over a decade.

Gail’s multi-faceted career and extensive legal and community service have garnered her a reputation for building consensus during disputes and forging partnerships among the legal community, government and the public they serve.

Gail regularly presents educational programs to the judiciary, attorneys, and law students on a variety of legal issues, especially those in the family law sector. She is a media contributor for Court TV, ALM and Attorney at Law Magazine where she hosts the podcast, Behind the Case with Judge Tusan. Gail is a Distinguished Visiting Instructor at Spelman College and an Adjunct Law Professor at Emory University School of Law. She currently serves as a member of the Georgia Leadership Institute for School Improvement and is a Past President of Buckhead/Cascade City Chapter of The Links, Incorporated. Gail serves as President of The Pave Foundation, Inc., which provides STEAM enrichment opportunities and mentoring to African American girls.

Among many other awards, Judge Tusan has received the Atlanta Bar Association Litigation Section’s coveted honor, The Logan E. Bleckley Award for Judicial Excellence, Distinguished Public Service in the Judiciary, Community Leader of Faith Award, Day1 and the MLK Center for Nonviolent Social Change’s Peace and Justice Award. Finally, Gail is a published author of two novels, Misjudged and Riley, The Judge’s Son (written under the pen name, Susan Washington), and a contributing author to the anthology Loving Wisdom by the Wisdom Whisperers (October 2020 Release).