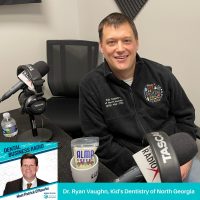 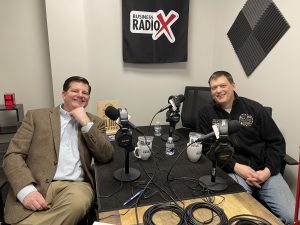 Dr. Ryan Vaughn, Kid’s Dentistry of North Georgia, joins host Patrick O’Rourke on “Dental Business Radio” to discuss how he built his practice, the unique mission of pediatric dentistry, his work with the Georgia Dental Association, and much more. “Dental Business Radio” is underwritten and presented by Practice Quotient: PPO Negotiations & Analysis and produced by the North Fulton studio of Business RadioX®.

At Kid’s Dentistry of North Georgia, we understand that children have very different needs when it comes to dental visits and that a positive experience at the dentist sets the stage for a lifetime of healthy teeth and big smiles. That’s why our pediatric dental office is dedicated to treating children in an encouraging and fun-filled atmosphere where a trip to the dentist is worry-free. Come experience it for yourself and call us to set up your first appointment today.

Dr. Vaughn welcomes you to Kid’s Dentistry of North Georgia! For Dr. Ryan M. Vaughn, opening a pediatric dental practice is the fulfillment of a lifelong dream. He believes in focusing on the whole health of a child and puts that belief into practice in his offices by taking a reasoned and holistic approach with his patients, focusing as much on prevention as treatment.

With an Applied Mathematics degree from the Georgia Institute of Technology, Dr. Vaughn went on to pursue his dental education at the Medical College of Georgia (MCG) and performed his dental residency at MGC and Children’s Healthcare of Atlanta. Dr. Vaughn is a board- certified pediatric dentist and is a member of many professional organizations including the Georgia Dental Association, where he serves as district president, the Hinman Dental Society, Pierre Fauchard, the Academy of Pediatric Dentistry, and the American Board of Pediatric Dentistry.

He and his wife, Julie, live in Flowery Branch with their four children, Madeleine, Eli, Scarlett and Piper, and their two dogs Lily and Lola. Dr. Vaughn is an avid Georgia Tech fan attending football games whenever possible, an active member of Prince of Peace Catholic Church, and a collector of transformers.

“Dental Business Radio” covers the business side of dentistry. Host Patrick O’Rourke and his guests cover industry trends, insights, success stories, and more in this wide-ranging show. The show’s guests will include successful doctors across the spectrum of dental practice providers, as well as trusted advisors and noted industry participants. “Dental Business Radio” is underwritten and presented by Practice Quotient and produced by John Ray and the North Fulton studio of Business RadioX®.

“Dental Business Radio” is sponsored by Practice Quotient. Practice Quotient, Inc. serves as a bridge between the payor and provider communities. Their clients include general dentist and dental specialty practices across the nation of all sizes, from completely fee-for-service-only to active network participation with every dental plan possible. They work with independent practices, emerging multi-practice entities, and various large ownership entities in the dental space. Their PPO negotiations and analysis projects evaluate the merits of the various in-network participation contract options specific to your Practice’s patient acquisition strategy. There is no one-size-fits-all solution.