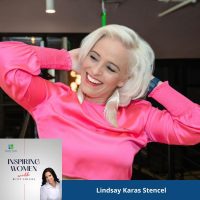 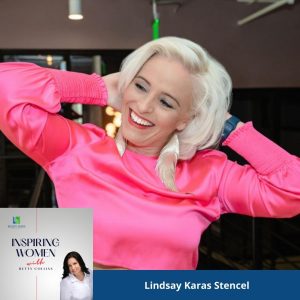 On this edition of Inspiring Women, Lindsay Karas Stencel joined host Betty Collins to discuss her career journey and how she navigates the male dominated world of venture capital.

One of the reasons that I have such a respect for her is that she thrives in a male-dominated venture capitalist environment. Women represent just 2% of the workforce in venture capitalism. So how does she navigate that world?

You always want to be in a position where you can make the decisions that are best for you and whether that’s for your career, for your family, for your mental health, whatever.

And when men dominate venture capital work, how does she work in that atmosphere?

I never even noticed it because I was just doing my job. Like, shame on me. I should have been better about that. In retrospect, I, I should have. But I was just doing my job. And then I realized like, holy smokes, I have a responsibility. Because if I’m one of the few people who was able to get a role that’s like this and start to pave a pathway for other females and diverse individuals to come, I better like do it right so that their path is a little bit easier. Because mine wasn’t easy.

Lindsey talks about what she would tell women today who are moving up in the corporate ranks.

You can never let that (intimidation) show, that it’s shaking you. If it’s shaking you, don’t let them see it. Because the second that they do, I think a lot of people smell blood in the water and they say like, oh, I can dig in here. The fight isn’t over. We’ve got a long way to go. And so people need to continue to push on.

And how do women do this?

Women can be really tough on women.

I think when people behave in that way, male or female, but females have a tendency to do it to other females for whatever reason. It’s usually a reflection of them. It’s not a reflection of us, right? It’s a reflection because they don’t feel good about themselves. They don’t feel enough. All of those things. Unfortunately, that’s not my problem. Right? That is a them problem and not a me problem.

Find out more about her here.