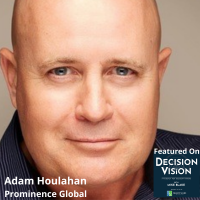 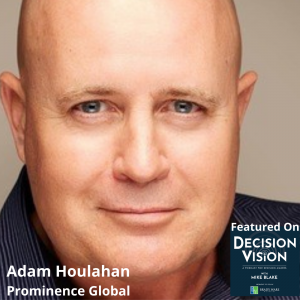 Decision Vision Episode 107: Should I Actively Use LinkedIn? – An Interview with Adam Houlahan, Prominence Global

Adam Houlahan of Prominence Global joined host Mike Blake to discuss his journey to recognition as a LinkedIn authority, why using LinkedIn can be so rewarding for business owners and professionals, why so many users get LinkedIn wrong, how to effectively use LinkedIn to build relationships, and much more. “Decision Vision” is presented by Brady Ware & Company.

Prominence Global is, you’ll find, very different. They help their clients position themselves as industry leaders who are the envy of their peers. Their mantra is authenticity. They create intelligent strategies that cut through the noise that is social media. They do that by being authentic, courageous, and committed to make a difference in their world too. They value transparency. More is learned from mistakes than successes, sharing both is their commitment to honesty and truth.

Ethics in marketing is in their DNA, they are not afraid to say ‘no’. They seek continuous improvement through innovation They are constantly curious in growing themselves, their team and the service they provide.

They understand there is no cookie-cutter program that suits every business. They develop solutions that are as individual as their clients are. They believe real and meaningful change comes through the world’s entrepreneurs.  They create a powerful on-line presence for each client that grows & accelerates their global footprint, so that together they really can make a huge impact.

Adam Houlahan is an International Keynote Speaker specializing in LinkedIn strategies for entrepreneurs, and CEO of the highly successful LinkedIn agency, Prominence Global. He hosts arguably the world’s largest free on-line LinkedIn training event with thousands of people registering every 10-weeks and is considered to be one of Australia’s leading experts in harnessing the power of LinkedIn for business.

Adam is also the author of three Amazon best-selling books Social Media Secret Sauce, The LinkedIn Playbook, and Influencer. Adam co-authored a fourth international best-seller Better Business, Better Life, Better World. He believes real and meaningful change comes through the world’s entrepreneurs. His purpose is to positively impact 12 million people in need and has surpassed 4 million on the way to that target.