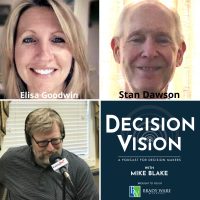 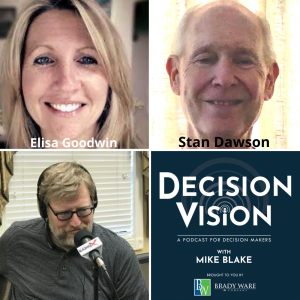 Decision Vision Episode 117:  Should I Work for a Non-Profit? – An Interview with Elisa Goodwin, Mission: Hope, and Stan Dawson, Retired from Crossroads Community Ministries

If you’re a corporate executive or business owner thinking about a second stage in your career working at a non-profit, this episode is for you. Elisa Goodwin, current CEO of Mission: Hope, and Stan Dawson, retired Executive Director of Crossroads Community Ministries, discuss their experiences with host Mike Blake, the myths of working for a non-profit, and much more. Decision Vision is presented by Brady Ware & Company.

Elisa Goodwin is currently President/CEO of Mission: Hope, an Atlanta-based, international non-profit serving through local leaders in the world’s most remote villages to build sustainable solutions to their most urgent issues. She has spent the last 15 years in nonprofit service. Prior to that, she was a bank executive in small business banking and retail for more than two decades. For those considering for-profit vs. non-profit careers, she can definitely provide perspective. Elisa attended Towson State University and received a B.S. in Mass Communications. She also received an MBA from Clark University. Her office is in Alpharetta, Georgia on the Jackson Healthcare campus

Mission: Hope is a Christ-centered organization committed to equipping churches and leaders to bring about sustainable transformation in isolated villages.

For over 20 years, they have tackled critical needs in some of the most remote areas on the planet. Led by the vision and adventurous spirit of Dr. Ben Mathes, their organization has provided medical care for millions and led thousands of people to experience new life in Jesus.

In 2017, Rivers of the World changed its name to Mission: Hope to reflect its broader reach beyond the river.

Their goal today is to continue building upon our rich history. While their work has expanded beyond the river, our heart and vision remain the same: doing whatever it takes to bring hope to the hopeless.

Their model looks at a village as a whole, working with the local leaders and churches to distinguish their assets as well as their greatest challenges. Their process heavily involves indigenous leadership for assessing the village and providing solutions to needs. Together they transform impoverished villages into sustainable ones.

Stan was the ED of Crossroads Community Ministries, Inc. from 1999 until 2016.

Prior to that, he was partner/co-owner of Northside Material Brokers, Inc. Prior to that he was Executive Director of Creative Interchange, Inc., (a division of FCS Urban Ministries) which focused on job development and business creation for those living in low-income communities. He also served as national Community Services Director for Prison Fellowship, Inc., Washington, DC. This organization’s mission was to assist federal and state prisoners transition back into mainstream society. He also worked with Boys Clubs of American where he designed the self-help youth employment program. He spent almost three years with Campus Life/Youth for Christ International working with low-income high school students.

After graduating from Georgia State University with a BBA degree, he began his professional career with the First National Bank of Atlanta in their Marketing Department.

Stan is married with two adult children and two grandchildren.

For over 20 years, Crossroads Community Ministries has been a leading provider of supportive services for those experiencing homelessness in our community. Last year, the staff and dedicated volunteers served over 4,200 men, women and children, primarily through our Renewal Project which consists of stabilization and job readiness training programs.