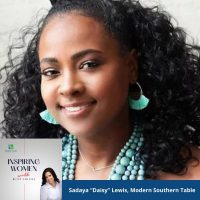 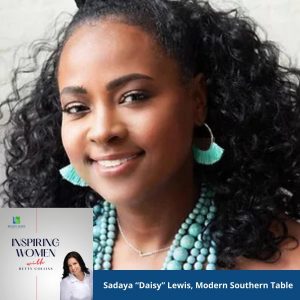 On this episode of Inspiring Women, Sadaya “Daisy” Lewis discussed the challenges of managing her restaurant and catering business during the pandemic, developing another product line, dealing with both family and funding challenges, and much more. The host of Inspiring Women is Betty Collins and the show is presented by Brady Ware & Company.

Modern Southern Table owner, Sadaya “Daisy” Lewis, started her restaurant and catering business seven years ago, combining her experience cooking southern-style cuisine and an MBA in marketing and finance from Capital University, Lewis has built an incredible southern comfort food concept offering fried chicken, gumbo, macaroni and cheese, and other southern classics. I like to call her the “comeback kid.”

First off, Daisy talks about working with restauranteur Cameron Mitchell…

Cameron has been just like the Big Brother (to me), being there to support. Always there to have advice (on pricing and branding) if needed.

Catering took a bit hit in 2020. And her business was no exception.

So when the governor DeWine said no events and he shut down the city of Columbus, you know, we thought it was going to be two weeks, three weeks. We thought it was going to be a little bit. But when he said no large gatherings, no weddings, my calendar cleared almost instantly. People started immediately calling, asking for refunds, asking to reschedule, asking to cancel.

But all business owners hit a point where they go, what the heck just happened? Daisy talks about the comeback.

I left Corporate America a few years earlier, so I really didn’t want to go back to that. And so I knew like I can’t cater, but there has to be something else you can do that will allow you to bring income in because you have a family to feed. And I started paying attention to what was happening around me on social media. Everybody had fallen into this situational depression. And one thing that was making us feel better was to eat or get some sweets. And I hate to say I took advantage of that horrible stress eating. But I did notice it with my peers and other businesses that the dessert industry had all of a sudden skyrocketed due to people were eating through their depression.​

So the hardest part for me with Little Daisy Cakes was starting a business all over again and trying to find new clientele and basically just start all over again. This was a whole new business. People weren’t familiar with my desserts. And so the hardest role was just relaunching and starting an all new venture, starting from zero.