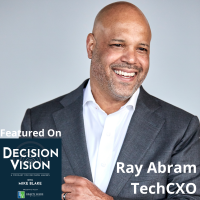 Decision Vision Episode 149: Should I Become More Extroverted? – An Interview with Ray Abram, TechCXO and author of Connect Like a BossJohn Ray
Download Audio 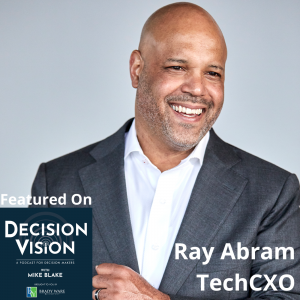 Decision Vision Episode 149:  Should I Become More Extroverted? – An Interview with Ray Abram, TechCXO and author of Connect Like a Boss

If connections and the quality of one’s network are a vital aspect of success in business, then how do introverts succeed? Should they become more extroverted? Joining host Mike Blake, Ray Abram of TechCXO and author of Connect Like a Boss discussed misconceptions about introverts, what it means to be an introvert in business, the impact of a digitally transformed world, managing introverts, and much more. Decision Vision is presented by Brady Ware & Company.

TechCXO provides companies with on-demand executives. TechCXO was founded on the premise that high potential companies can greatly benefit from proven, interim executives who they otherwise may not be able to access due to cost, availability, or because they do not necessarily need them full time. Our purpose is to provide the best executive talent available… on demand.

Ray Abrams knows what it’s like to overcome introversion and lack of confidence. As a self-proclaimed super-shy kid, he has risen out of mediocrity to find the success he previously only dreamed about.

For decades, Ray, a graduate of Hampton University in Virginia moved from job to job never finding the level of success he sought. Until one day he read an article on LinkedIn that said over 80% of jobs and opportunities come through people that we know. Eureka! Ray then began amassing a wealth of knowledge on how to build what he calls a “Circle of Success”.

He has since used that knowledge to not only change his life, but put countless others on the path to realizing their dreams through the people that they are connected with.

In his first book, Connect Like a Boss, Ray shares his fascinating experience on the strategies he used to become the best version of himself and fill his contact list with the people who could help him get what he wanted out of life. He is uniquely qualified in the fundamentals of identifying goals, working a room, and building long-term connections with intention. His mastery of these fundamentals can help your group triumph in this time-crunched, disconnected world.

Ray Abram’s message about the Seven Steps to Building Lasting Business Relationships, based on the science of building intentional friendships, resonates with diverse audiences at every level. He helps executives and entrepreneurs learn the art of prioritizing, categorizing, aligning, and pinging their contacts to maximize the value of their personal relationships in an efficient. effective way. Ray has delivered his networking and relationship strategy experience to such companies as Viacom, AT&T, Coca-Cola, and Cox Media, to name a few.