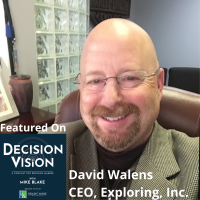 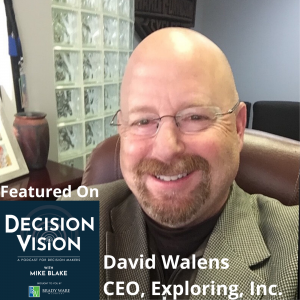 Decision Vision Episode 119: Should I Return to In-Person Events? – An Interview with David Walens, Exploring, Inc. 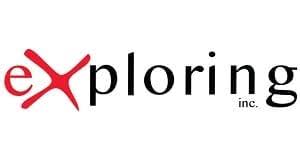 Their companies span a range of industries, from the exhibit and event industry to hospitality, commercial, retail, architectural, automotive, museum, and other markets.

What each Exploring company has in common, however, is a ceaseless focus on discovering truly innovative solutions and value for clients. In fact, that focus is what they look for when adding new companies to the Exploring family.

Dave has over 30 years of experience in developing and growing businesses. His ability to think creatively and strategically and his unwavering commitment to customer service are true differentiators. He has extensive experience in exhibit design and construction, event fabrication, graphic production, flooring production, and project management. This experience, combined with in-depth industry knowledge and expertise enables Dave to assist companies in reaching their strategic marketing objectives as efficiently and as effectively as possible.

Dave has been CEO of Exploring, Inc. for 22 years. He has a degree from Kennesaw State University.