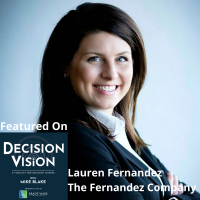 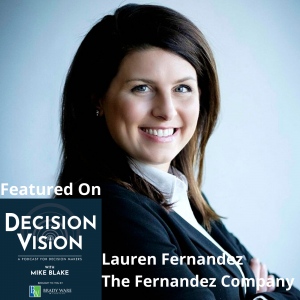 Decision Vision Episode 120: Should I Change Careers? – An Interview with Lauren Fernandez, The Fernandez Company

Lauren Fernandez tells her story of “taking the law degree down off the wall in an executive office, putting it away in a closet, and putting on a hairnet and clogs.” Lauren joined host Mike Blake to discuss both the successes and difficulties of her career journey moving from corporate counsel to restaurant owner/operator. Decision Vision is presented by Brady Ware & Company.

The Fernandez Company specializes in helping restaurant brands grow from 2 units to 20 and beyond. Lauren Fernandez is fully immersed in the restaurant industry as an operator, developer and executive with deep business and industry understanding. The Fernandez Company generates new revenue streams for companies, particularly in the food & hospitality industries. They diversify revenue streams outside the four walls of a restaurant by creating new channels of revenue in the areas of organic expansion, franchising, product development and licensing. They create this growth for their clients through their process of strategic consulting, management support and investment.

Lauren is the founder of The Fernandez Company, the culmination of nearly two decades as a trusted brand consultant and legal advisor with all kinds of clients, from start-ups to multinational companies, to private equity and investment firms.

She consults with companies in all aspects of restaurant and franchise development, brand licensing, product development, and market implementation. Lauren is an expert in multi-national product development and commercialization in the heavily regulated food, alcohol, pharmaceutical, and medical industries.

As a co-founder and investor in Origin Development Group, Ms. Fernandez has been both a multi-unit franchisee and brand developer, serving as a strategic growth partner for companies such as Chicken Salad Chick®. Lauren also served as the General Counsel for FOCUS Brands where she led both the legal team and franchise administration and was instrumental in the rapid growth of the licensing program.

Prior to joining FOCUS Brands, Lauren was part of an elite team at Novartis/CIBA VISION that successfully launched the company’s first new product in over a decade. She started her career in one of Atlanta’s most respected Intellectual Property Boutiques, Gardner Groff.

Lauren holds an undergraduate degree from Stetson University, as well as a Juris Doctorate and MBA from Emory University. She serves on the Advisory Board for the Atlanta Community Food Bank.  She also is a dedicated fundraiser for The Leukemia & Lymphoma Society and was named the 2015 Woman of the Year by the Atlanta Chapter.  She is a native of the Tampa Bay area but has lived in the Atlanta area for nearly two decades.