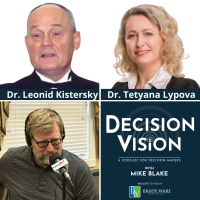 Decision Vision Episode 164: Should I Do Business in Ukraine? – An Interview with Dr. Leonid Kistersky and Dr. Tetyana LypovaJohn Ray
Download Audio 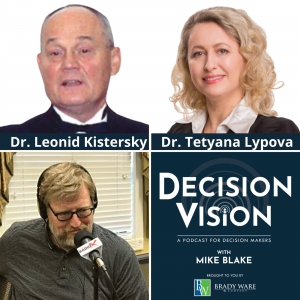 Decision Vision Episode 164: Should I Do Business in Ukraine? – An Interview with Dr. Leonid Kistersky and Dr. Tetyana Lypova, IPR Group

Dr. Leonid Kistersky and Dr. Tetyana Lypova, co-founders of Kyiv-based IPR Group and long-term friends of host Mike Blake, joined the show from Poland after safely escaping their home country Ukraine. They discussed their work, the evolution of their work as they cope with the realities of war, the way the war has reshaped the economy in Ukraine, the resiliency of the Ukrainian people, future opportunities in the country, and much more.

During the show, Leonid and Tetyana offered several causes to which you can contribute to help the Ukrainian cause. Follow this link for more information.

He worked as an economic adviser at the Secretariat of the United Nations Conference on Trade and Development (UNCTAD) in Geneva (Switzerland), was the founding chairman of the National Center for Implementation of the International Technical Assistance to Ukraine in the rank of a Minister.

Dr. Kisterski is the author and co-author of almost 150 scientific works, including 15 books and textbooks on international economic relations and business development, published in Ukraine, Switzerland, Russia, USA, Great Britain, Poland, Germany, Czech Republic and in other countries; international organizations such as the UN, the World Bank and the European Union also published his books and articles.

In 2019, President of Ukraine Volodymyr Zelenskyy awarded Professor Kistersky the title of “Honored Worker of Science and Technology of Ukraine”.

Dr. Tetyana Lypova received a Ph.D. in economics from the Institute of International Relations of Taras Shevchenko National University of Kyiv. She is Associate Professor and Deputy Director of the Institute for International Business Development, which promotes business development and financing of business projects.

Graduated from the Faculty of Economics and Management of Vadym Hetman National Economic University of Kyiv. She underwent internships in the programs of Brown University (USA), the London Center for International Economics, and the Consortium for the Improvement of Education Management in Ukraine.

Tetyana Lypova has worked as a trainer, consultant, expert analyst on numerous projects and programs of such international organizations as the EU, UNDP, World Bank, USAID, Know-How Found, and other leading international institutions.

Since 2015, she has also been working as the head of the licensing department at the international company IPR Group, where she provides advice to Ukrainian and foreign entrepreneurs on prosecution and registration of trademarks, enforcement of rights, licensing and franchising, protection of geographical indications, copyrights, dispute resolutions, etc. She works with national and international clients and companies on intellectual property protection in Ukraine and in post-soviet independent countries like Georgia, Armenia, Azerbaijan, Kazakhstan, Kyrgyzstan, Tajikistan, Turkmenistan, Uzbekistan, and Moldova.

She was a member of the Geographical Indications Committee of the International Trademark Association (INTA).

Tetyana Lypova is the author of about 60 scientific publications, including 5 monographs and textbooks on international economic relations, international technical assistance, and small and medium business development.