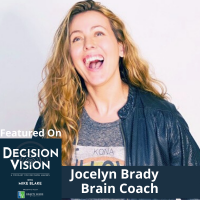 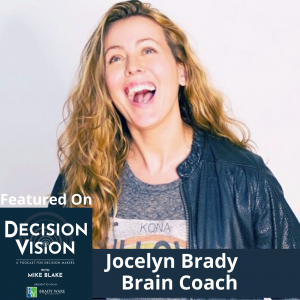 Decision Vision Episode 150:  Should I Pivot? – An Interview with Jocelyn Brady, Brain Coach

When Jocelyn Brady began to be bored and even resented the projects she was working on in her business, she recognized an itch she needed to investigate. Then came the pandemic, which caused its own disruption, and Jocelyn pivoted away from writing and content creation to working as a Brain Coach. In this conversation with host Mike Blake, Jocelyn describes what it is like to have a successful company and yet be unfulfilled, the impact of Covid on her trajectory, her mixed feelings about the word “coach,” and much more. Decision Vision is presented by Brady Ware & Company.

Jocelyn Brady is a writer, speaker, and professional brain jostler who thrives at the intersection of comedy, storytelling and unraveling the mysteries of the human brain. When she’s not being the Bill Nye of the brain (as the creator and host of her series Tiny Tips, the Internet’s favorite way to Brain), Jocelyn applies her certified Brain Coaching chops to help creative visionaries tap their brains’ greatest potential.

In her past life—as an award-winning copywriter, Creative Director, and agency CEO—Jocelyn led narrative strategy and international storytelling training for some of the world’s biggest brands. She also produced and co-hosted Party Time, a standup comedy and storytelling show featuring talent who went on to write or perform for Conan, Colbert, and Comedy Central. All while managing to keep her two cats and houseplants alive.

Jocelyn’s first book, tentatively titled Your Brain is a Magical Asshat, is slated for publication next year.