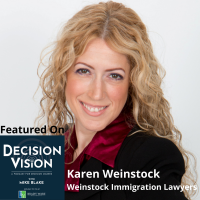 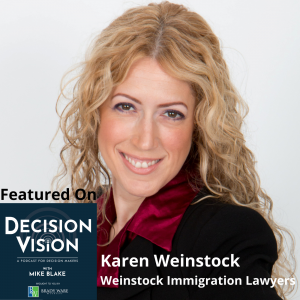 Decision Vision Episode 129: Should I Sponsor a Foreign Employee for a Work Visa? – An Interview with Karen Weinstock, Weinstock Immigration Lawyers

When a business has an opportunity and need to hire a foreign employee and sponsor them for a work visa, what issues and obligations does that decision raise?  Having immigrated from Israel over twenty years ago herself, Karen Weinstock of Weinstock Immigration Lawyers not only has personal experience with this question, but over two decades of experience assisting companies with the complexities of sponsoring and hiring an employee from outside the U.S. Decision Vision is presented by Brady Ware & Company.

Weinstock Immigration Lawyers offer legal services to companies and individuals to obtain all their immigration needs to the USA, including all work and family visas, green cards, citizenship, and defense from deportation.

Karen Weinstock is the Managing Attorney of Weinstock Immigration Lawyers, one of the best immigration law firms in Atlanta, Georgia. With over two decades of experience, she has substantial expertise representing U.S. and international companies to secure global talent and ensure a successful transition for foreign employees and their families. Karen has represented Fortune 500 and publicly traded companies in both the U.S. and abroad. Indeed, she has helped many European, Asian, and Latin American enterprises and international investors achieve their American Dream. As such, she is also a sought-after speaker on immigration law in forums, conferences, and the media.

Born and raised in Israel, Karen immigrated to the United States in 2000. Her passion for immigration law is a direct result of her personal experience. Karen’s compassion for clients and commitment to excellence distinguishes her as one of the best immigration attorneys in the nation. Karen is trusted not only by her clients. Atlanta’s largest corporate law firms and other immigration attorneys consult her for advice in complex immigration matters on a regular basis. Legal and business communities across the country regard Karen as a true leader in immigration and a role model among women entrepreneurs.