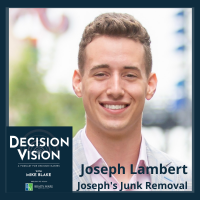 Decision Vision Episode 142: What Should I Do After Graduating High School? – An Interview with Joseph Lambert, Joseph’s Junk RemovalJohn Ray
Download Audio 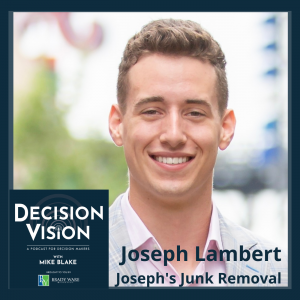 Decision Vision Episode 142:  What Should I Do After Graduating High School? – An Interview with Joseph Lambert, Joseph’s Junk Removal

As a senior in high school, Joseph Lambert started his junk removal business with a rented truck and hasn’t looked back. Now 20 years old, Joseph is in a unique position for this conversation with host Mike Blake on options for young people after high school. They discussed why college may not be a given anymore, Joseph’s path in his business and the lessons he’s learned, why Joseph believes undergraduate business degrees are a “waste of time,” how young people should figure out their own direction, and much more. Decision Vision is presented by Brady Ware & Company.

Joseph’s Junk Removal’s story really starts when Joseph was 12 years old. As his parents were finalizing their divorce, Joseph realized the challenge ahead for his mom as she would try to provide for him and his four younger siblings. In an effort to help, Joseph started mowing lawns and working in construction to cover his own expenses. As a result, Joseph was able to release some of the burden off his family and discovered a hunger for growing a business in the meantime.

As mowing lawns grew, Joseph partnered with a friend who was older and could drive. The business model was simple: Joseph handled customer service, marketing, and scheduling. Sam handled the transportation.

At age 17, Joseph made $1600 in 4 hours by removing a bunch of junk for a landscaping client. He couldn’t believe it! After completing the job, Joseph researched the junk removal industry and was blown away by the margins, simple process, and scalability potential. From this point on, he focused on junk removal.

By senior year of high school, Joseph’s junk hauling business “Highschoolers Hauling Junk” was growing rapidly. As he juggled work, football, and baseball, Joseph put classes on the back burner. Consequently, he ended up failing a crucial class necessary to earn a diploma. As a result, he stayed in high school an extra semester (while all his friends went off to college) to finish the class.

While Joseph finished the class, the junk removal business (now called “Joseph’s Junk Removal”) was booming! By now, he was convinced of the immense potential in junk removal. After a full power-point presentation, Joseph got the greenlight from his family to pursue it full-time after graduation.
Less than 2 years after Joseph “officially” graduated high school, Joseph’s Junk Removal has grown to 25+ employees and 5 trucks. In that time span, Joseph and his team have fallen on their faces a lot. Lessons have been learned (some the hard way). But ultimately, every challenge the team has faced has made them stronger and more equipped to conquer the future.