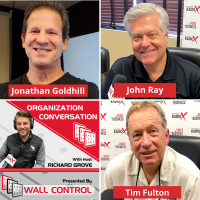 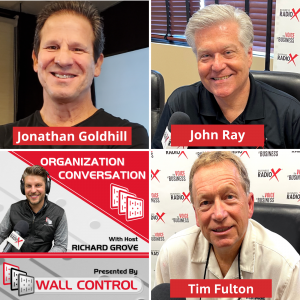 Host Richard Grove welcomed three seasoned business advisors, Jonathan Goldhill, John Ray, and Tim Fulton, to discuss issues small business owners face as they seek to thrive in today’s economy. They discussed the talent shortage and how to deal with it, how to manage inflationary pressures, pricing, organizing your business as if it were a much larger enterprise, preparing for an exit, and much more.

Business coaching, mentoring, and consulting to growing companies with 10 to 150 employees in family businesses, construction, and service-related businesses. We guide leaders and owners to grow their businesses and enjoy the journey more using proven processes, systems, and tools that both accelerate growth and guide people to more freedom and fulfillment.

Jonathan Goldhill is a masterful business coach and personal strategist specializing in guiding next-generation leaders of family businesses to scale up their business as they take control over the leadership and ownership of the family business.

Jonathan left New York for California at age 20 after his family’s large, privately-held men’s apparel manufacturing company—started by his great-grandfather—sold to a conglomerate in its third generation of family ownership.

Within ten years, Jonathan had established himself as the go-to expert for entrepreneurs looking to find their version of freedom.

John is a Studio Owner, Producer, and Show Host with Business RadioX®, and works with business owners who want to do their own podcast. As a veteran B2B services provider, John enjoys coaching B2B professionals to use a podcast to build relationships in a non-salesy way which translates into revenue.

John also owns Ray Business Advisors, a business advisory practice. John’s services include advising solopreneurs and small professional services firms on their pricing. John is passionate about the power of pricing for business owners, as changing pricing is the fastest way to change the profitability of a business. His clients are professionals who are selling their “grey matter,” such as attorneys, CPAs, accountants and bookkeepers, consultants, marketing professionals, and other professional services practitioners.

With over 30 years of experience, Small Business Matters (SBM) brings a results-based approach to each and every client. Whether your business has been established for 50 years or 50 days, we are passionate about helping you achieve your goals and mission.

Small Business Matters was established in 1994 as an independent management consulting and training practice. The primary goal of SBM is to increase the effectiveness and enhance the lives of CEOs. Since its existence, Small Business Matters has worked with companies such as Lucent Technologies, Carlson Companies, CB Richard Ellis Real Estate Services, Inc. (formerly Insignia/ESG, Inc.), and Georgia Power.

Small Business Matters is owned and operated in Atlanta, Georgia by Tim Fulton. Tim is a nationally-recognized small business coach, consultant, and advocate. He has been involved in the field of entrepreneurship for over three decades as a successful business owner, small business counselor, and adjunct university professor.

Tim is currently a Vistage Emeritus in Atlanta. Vistage is an international membership organization for company CEOs and Presidents that provides a very unique growth experience for its members. In addition, Tim is a former facilitator for the University of Georgia SBDC’s GrowSmart training program, which is designed for growth-oriented small business owners, operators, and executives.

Tim has recently authored a new book, The Meeting, available on his website and where books are sold.

Tim is also the host of the podcast, Small Business Matters, available here and other major podcast platforms.

Tim grew up in Miami Florida. He attended college in New Orleans at Tulane University where he earned an undergraduate degree in Economics and a 5 year MBA.

Tim owned and operated several small retail businesses in Miami. He also taught as an adjunct professor and served as the interim Director of the Family Business Institute at Florida International University. After moving to Atlanta, Tim was a co-founder of an internet software company that was an INC 500 company and then sold to a Fortune 1000 company.

In 1992, he started his own small business consulting firm Small Business Matters. Tim was a Vistage Chair for 16 years, retired from Vistage in December 2018, and currently enjoys Chair Emeritus status. In 2008, he developed the GrowSmart training program for the state of Georgia and has trained over 3000 small business owners in 15 different states.

Tim has an award-winning Small Business Matters newsletter, he has self-published three different books including most recently the book titled “The Meeting”, and co-hosts a popular podcast for small business leaders.

For six years, Tim has hosted one of the largest annual events in Atlanta for small business owners.

He has been married to his college sweetheart Remy for 40 years, has two grown sons, and is an avid tennis player. Tim has walked the entire 500-mile El Camino Santiago in Spain on two different occasions and just recently walked the 400-mile Camino Portuguese.