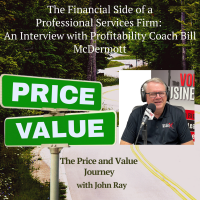 The Financial Side of a Professional Services Firm: An Interview with Profitability Coach Bill McDermottJohn Ray
Download Audio 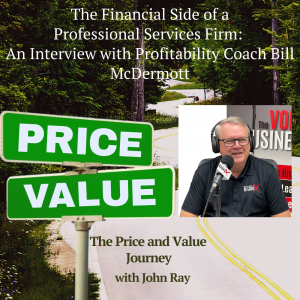 The Financial Side of a Professional Services Firm: An Interview with Profitability Coach Bill McDermott

Profitability Coach Bill McDermott, who works with law firms, engineering firms, consulting firms, and other professional services practices, joined host John Ray to discuss the financial side of a professional services firm. Bill discussed why he started his practice and how it has developed, when to take on debt, the biggest financial mistakes he sees, buying hard assets such as real estate, planning for an exit, and much more.

The Price and Value Journey is presented by John Ray and produced by the North Fulton studio of Business RadioX®.

Bill has worked with hundreds of business owners. They are good people with their hearts in the right place. What they don’t have is the perspective to see the blind spots in their business. Knowing which levers to pull and when to pull them can lead to a thriving and profitable business.

He loves to help business owners have the business they want by becoming better financial managers.

Bill McDermott graduated from Wake Forest University and launched a career in banking that spanned 32 years. He first started out as the “repo man” as part of Wachovia Bank’s management training program before locating to Atlanta to work for Peachtree Bank, which later became SunTrust. There, he distinguished himself as a great producer of loans and deposits for the bank, climbing the ranks to ultimately become a Group Vice President in the Commercial Banking division. In 2001, Bill’s group won the SunTrust Cup for being the highest performing commercial banking group in the company.

Over the next 8 years, Bill worked in community banking, becoming a top producer for IronStone Bank and later helping to double Embassy National Bank’s initial capital in loan production within 15 months. However, in early 2009 as the Great Recession was rapidly altering the economy, Bill’s position as Chief Commercial Lender was eliminated.

As Bill searched for what was “next”, he realized that he had a desire to share the treasure trove of knowledge of banking and financial acumen he had built. Bill combined his sales success from his banking/insurance experience with his deep financial/analytical skills and launched McDermott Financial Solutions in April 2009. His purpose quickly became “making business owners better financial managers”. Over the past 11 years, he has served over 200 clients by delivering results-oriented insights, helping to take them from financial confusion to financial clarity.

Bill currently sits on the board of directors for Pinnacle Bank. He also hosts a monthly podcast, ProfitSense, which features stories of successful business owners and the professionals that advise them. When Bill is not working, you can find him on the golf course, gardening, spending time with his family, and leading a small group at his local church.