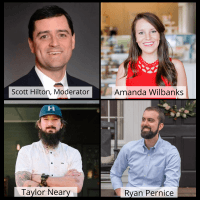 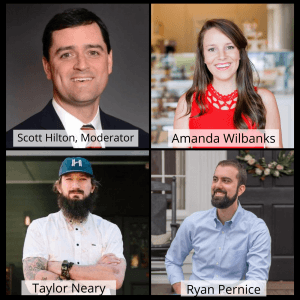 Three outstanding entrepreneurs, Ryan Pernice of RO Hospitality, Amanda Wilbanks of Southern Baked Pie Company, and Taylor Holmes, Restaurant Holmes, share their stories on how they’ve successfully navigated the pandemic. It’s a episode which is both instructive and encouraging.

Prior to this role, Scott spent a career in commercial banking at a regional financial institution, providing small businesses with the valuable capital needed to fund growth. Scott also served as a State Representative in the Georgia General Assembly. During his tenure as representative, Scott was appointed to a leadership role as deputy whip and was recognized as “Legislator of the Year” by numerous organizations, including the Georgia Charter School Association and Council of Municipal Court Judges.

With family recipes, Southern charm and an all-butter pie dough that melts in your mouth, Amanda and her team of bakers create gourmet sweet and savory pies for all of life’s special occasions and celebrations. Southern Baked Pie Company masterfully creates a variety of decadent flavors and specialty selections utilizing seasonal fresh fruit from local Georgia farmers and businesses. They offer pies in a variety of sizes including: whole pies, petite pies, and bite-size tassies. While they’re born and baked in Georgia, Southern Baked Pie Company ships pies to corporate and individual clients nationwide.

Co-owner and Executive Chef of Restaurant Holmes, Taylor Neary grew up in the Roswell-Alpharetta area and prior to opening his own restaurant, worked at several well known restaurants in metro Atlanta. Restaurant Holmes lives in The Historic Jones House (built in 1915) in downtown Alpharetta’s City Center development.  Holmes opened in July of 2018 and continues to specialize in plates to share, offering local hyper seasonal vegetables and other unique chef creations – all cooked on a wood fired grill.

Ryan Pernice and his brother Daniel, a co-owner in the restaurants, have lived in Roswell for 25+ years, both graduating from Roswell High School many years ago. RO Hospitality currently owns three restaurants: Table & Main and Osteria Mattone in Roswell and Coalition Food and Beverage in Alpharetta.

Ryan graduated from Cornell University’s School of Hotel Administration with distinction in 2007. Afterwards, he lived in New York City working for acclaimed restaurateur Danny Meyer at Maialino, an Italian trattoria, before moving home in 2011 to open Table & Main.

Ryan’s restaurants are currently back to full operation and trying everything under the sun to remain top-of-mind for potential guests amidst all this craziness. Early on in the pandemic, they transformed Table & Main into a soup kitchen donating meals at no charge to the newly food insecure. They are proud to have fed 9,750 people during this difficult time.