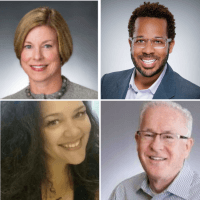 The host of “The GNFCC 400 Insider” is GNFCC CEO Kali Boatright, and the show is presented by the Greater North Fulton Chamber of Commerce and produced by the North Fulton studio of Business RadioX®. Business RadioX is the Media Sponsor for this series of Economic Recovery Forums.

Felton Anderson is a coordinator for labor relations for Georgia Power Company, headquartered in Atlanta.  In this position, Felton provides strategic consulting and effective solutions to senior management of Georgia Power and leadership of the International Brotherhood of Electrical Workers Local Union 84 concerning labor and employment issues and plays an integral role in negotiations between the parties.

Since 2002, Felton has held various positions of increasing responsibility at Georgia Power in corporate services, marketing, customer service, distribution, and human resources.  Felton has been active in leadership development and mentoring programs for Southern Company and in the community. As an alumna of Leadership North Fulton, Felton is currently serving as a 2019-2020 program co-chair for Leadership North Fulton, a program of the Greater North Fulton Chamber of Commerce.  Felton also serves on the board of directors for the Children’s Development Academy in Roswell.

Felton earned a Bachelor of Arts degree from Birmingham-Southern College in Birmingham, Alabama.  Felton and her husband, Johnny Herbert, have four sons and live in Milton, Georgia.

Dr. Harrison also currently serves as a Clinical Assistant Professor of Industrial/Organizational Psychology at The University of Georgia. He is a published diversity researcher, and is renowned for his research on the topic of colorism. His master’s thesis received wide publicity–being featured on websites such as CNN, CNBC, ABC News, was reported in various newspapers and media outlets across the US (and United Kingdom), and received an initial inquiry from an executive producer of The Oprah Winfrey Show.

Dr. Harrison is a graduate of Emory University (B.A.) and The University of Georgia (M.S. & Ph.D.).


Jay has over 35 years of sales/sales management experience working at both start-up and multi-billion dollar companies primarily in the software IT industry.

Jay began his leadership 23 years ago at RUMC Job Networking (www.RUMCjobnetworking.com) in 1997 which was 9 years after the founding of the ministry. Since this time RUMC Job Networking has grown to become one of the largest ministries of its kind in the United States. Hundreds of people are typically on-site and now job seekers attend virtually every second and fourth Mondays through their 11-hour virtual workshop and one-on-one sessions. Jay is also the creator of the WoW! Interview (www.WowInterview.com) and has presented his method in person to over 10,000 people in career transition. RUMC Job Networking has been showcased by ABC’s World News Tonight by Diane Sawyer, The Economist, Atlanta Journal Constitution, WSB-TV, The Wall Street Journal and many other media sources.

Jay has been married to his wife Donna for 37 years and they have three adult children. Jay and Donna have lived in Roswell for 26 years.

Jenny Taylor is a sought after public speaker on the topics of successful large-scale public/private partnerships, employer engagement, workforce development, and employment outcomes for people with significant barriers. She is Vice President of Career Services at the second largest Goodwill in the nation, leading evidence-based programs with outcomes in the top 10% of the industry, as measured by the National Benchmarking Project.

Her agency has a $175 million dollar budget and operates programs that placed 25,688 people in competitive employment last year.