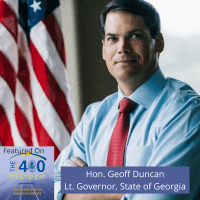 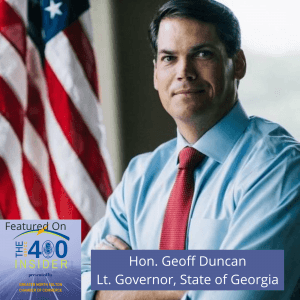 Georgia Lt. Gov. Geoff Duncan joined this month’s Wellstar Chamber Luncheon as the keynote speaker, offering a 2020 legislative review and more. The host of “The GNFCC 400 Insider” is GNFCC CEO Kali Boatright and the show is presented by the Greater North Fulton Chamber of Commerce and produced by the North Fulton studio of Business RadioX®. John Ray and North Fulton Business RadioX served as the media sponsor for this event.

Geoff graduated from Chattahoochee High School in Alpharetta where he met his wife, Brooke. Geoff and Brooke both attended the Georgia Institute of Technology where Geoff was a scholarship pitcher. After a successful career at Georgia Tech, Geoff was drafted by the Florida Marlins’ organization. Geoff spent six seasons playing baseball in the minor leagues, advancing as high as AAA before a shoulder injury forced his retirement in the early 2000s.

After retiring from baseball, Geoff and his wife Brooke started a small marketing firm in their living room. The company experienced tremendous success which allowed Geoff and Brooke to sell the business and move on to multiple other entrepreneurial ventures. Geoff most recently served as the CEO of a health technology startup.

Geoff’s faith inspired him to a life of leadership and prompted his upstart run for political office. He was elected to the Georgia House of Representatives in 2012. During his time in office he authored several important pieces of legislation. These include HB 749-The Cargo Theft Act, HB152-Michael’s Law and most recently SB258- the Rural Hospital Tax Credit.