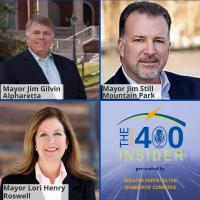 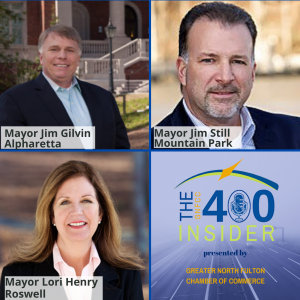 This year’s North Fulton Mayors Appreciation Luncheon included updates from City of Alpharetta Mayor Jim Gilvin, City of Roswell Mayor Lori Henry, and City of Mountain Park Mayor Jim Still. The host of “The GNFCC 400 Insider” is GNFCC CEO Kali Boatright and the show is presented by the Greater North Fulton Chamber of Commerce and produced by the North Fulton studio of Business RadioX®. John Ray and North Fulton Business RadioX served as the Media Sponsor for this event.

Jim Gilvin is the Mayor of Alpharetta, GA, elected in May 2018. Mayor Gilvin has lived in Alpharetta since the late 1990’s along with his wife, Mary Anne, and their two children Justin and Sarah. The Gilvins live in the Windward subdivision and attend Mount Pisgah United Methodist Church. Mayor Gilvin holds a Bachelor’s Degree in Finance from Georgia Southern University.

He is a residential real estate agent and an owner of an Alpharetta-based technology company. He served on the Alpharetta City Council from 2012 to 2018, when he resigned his seat to run for Mayor. During his time as City Councilman, Gilvin served as liaison to Alpharetta’s Parks and Recreation Department and the Public Safety Department.

Jim and his wife Debbie have lived in Mountain Park with their 3 rescued pets since 2001. They own a HR consulting company and rental properties in Mountain Park and on the Gulf Coast. Jim served one year on Citizens Review Advisory Board (CRAB), four years on city council, and has been the Mayor since 2008.

Prior to being elected as Mayor in 2018, Lori previously served as a City Councilmember from 2001-2009 and in 2017. She has a strong history of public service and has served her community not only on City Council but also as a member of the Design Review Board, the Community Development Advisory Committee, and on several citizen advisory groups over the years. She is the owner of a small business, H and B Promotional Products, located near Roswell’s Historic District. Lori uses her business experience not only to attract businesses to Roswell but also to apply sound business practices to government.

Lori has always been an unwavering supporter of Roswell’s neighborhoods and the community’s needs. She wrote Roswell’s “Big Box Ordinance” which protects Roswell from large retailers who wanted to abandon their mega stores, devastating property values in the area. The ordinance mandates the renovation and reuse of the existing big box stores. Lori also wrote an update to the Tree Ordinance that tightened development standards in order to preserve Roswell’s tree canopy. She has spoken to numerous groups throughout the state including the City/County Managers Association, the Georgia Planning Association, and the Atlanta Regional Commission’s Community Planning Academy as an authority on redevelopment issues facing suburban communities.

Lori and her husband, Karl have been long-time residents of Roswell, where they raised their now-adult daughter, Scottie. Lori moved to Roswell as a young adult with her parents, who lived in Martin’s Landing for over 35 years. Lori is a graduate of Ohio State University and began her career as a Cobb County public school teacher.