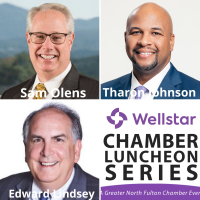 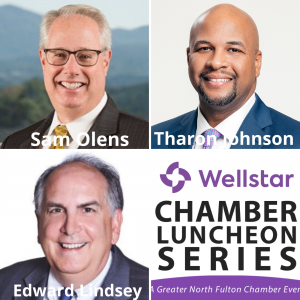 Today’s guests were Sam Olens and Edward Lindsey of Dentons US, LLP Law Firm and Tharon Johnson, CEO of Paramount Consulting Group. Ed Lindsey moderated the session, while Sam and Tharon offered their perspectives of their year’s legislative session and more.  The Gold Sponsor for this luncheon was AT&T. John Ray and North Fulton Business RadioX® served as the media sponsor for this event.

Samuel S. Olens is a counsel in Dentons’ Public Policy practice and is a member of the firm’s State Attorneys General group, based in the Atlanta office. His practice focuses on state attorneys general and local government affairs matters.

Sam was twice elected attorney general of Georgia, in 2010 and 2014. In that role he worked to strengthen the penalties for and protect the victims of sex trafficking, guided a comprehensive revision of Georgia’s sunshine laws and led the effort to stem the epidemic of prescription drug abuse. Olens also served as vice president of the National Association of Attorneys General in 2016, having previously served as chair of the 13-state Southern Region both in 2013 and 2015.

Prior to being elected attorney general, Olens was chairman of the Cobb County Board of Commissioners, serving from August 2002 through March 2010. He previously served as a county commissioner from 1999 through June 2002.

Sam was chair of the Atlanta Regional Commission board as well as a member of the Board of the Department of Community Affairs. Sam has a history of taking a regional approach to problem solving. During his time at the Atlanta Regional Commission, Sam Olens was awarded the Tom Bradley Leadership Award by the National Association of Regional Councils. The award recognizes leadership excellence an elected or appointed official has made in advocating regional concepts, approaches, and programs at any level of government.

Sam also served as Vice-Chair of the Metropolitan North Georgia Water Planning District, a 16-county planning entity dedicated to developing comprehensive regional and watershed-specific plans for the district and as a board member of the National Association of Counties Transportation Steering Committee.

Sam is a registered mediator/arbitrator with the Georgia Office of Dispute Resolution. He has been admitted to practice law in Georgia and the District of Columbia.

Following his time in government, he advised private sector clients on their public policy strategies as a partner at a leading government affairs firm. Politics Magazine named Tharon as one of the “Top 10 Democrats in Georgia” and a “Campaign & Elections 2010 Rising Star.” He also received “40 Under 40” Awards from both Georgia Trend Magazine and The Atlanta Business Chronicle. Named by James Magazine as one of the “Top 25 Most influential Georgians,” Mr. Johnson was the youngest and the first African American to receive The American Association of Political Consultants’ distinction of “Campaign Manager of the Year.”

As a regular key contributor on CNN, MSNBC, Fox 5’s “The Georgia Gang,” WSB-TV and Georgia Public Broadcasting’s “Political Rewind,” Tharon provides insights and analysis of political and policy developments. Johnson is also a permanent contributor to WABE’s “Political Breakfast” podcast with Denis O’Hayer and is frequently quoted in publications such as The New York Times, Newsweek, The Washington Post, The Atlanta Journal-Constitution, Politico, The Hill and Roll Call.

Edward Lindsey is a partner in Dentons’ Public Policy practice and serves as the head of the Firm’s Georgia State Government Affairs team. His focus is on advancing the public policy interests and objectives of clients in the transportation, infrastructure, health care and education sectors. Edward has more than 32 years of legal, political and leadership experience, including 10 years as a Georgia state representative and 3 terms as the House majority whip. He also served on the House Appropriations, Judiciary, Education, Ways and Means, and Rules Committees. In addition, he served as a member of the Uniform Law Commission and the Georgia Commission on Family Violence. James Magazine, a statewide political journal, recognized him as one of Georgia’s most influential legislators. Immediately prior to joining Dentons in 2016, Edward was a partner and head of the litigation practice at Goodman McGuffey Lindsey & Johnson LLP, an Atlanta-based firm he cofounded in 1990.

The hospital is recognized for its accredited cancer program, trauma and primary stroke center designations, and for providing a continuum of services through its centers and programs, including neurosciences, pain management, cardiology, women’s services, rehabilitation, surgical services, and oncology. For more information click here.​