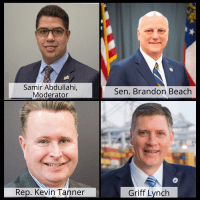 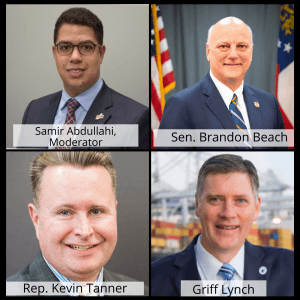 Samir Abdullahi is Deputy Director of Economic Development at Select Fulton.  It is the Fulton County, Georgia’s economic and workforce development initiative that drives collaboration among public and private partners in order to generate inclusive growth, opportunities, and prosperity for the Metro Atlanta region.

Select Fulton does this by fostering the creation of middle and high skill jobs in our key industries, preparing our residents for those opportunities, and accelerating the growth of connected and sustainable commercial development. Additionally, Select Fulton provides collaborative economic development leadership to promote a globally competitive, prosperous, and growing Fulton County economy to improve the wellbeing of our residents and communities.

State Senator Brandon Beach, a Republican, was elected to the Senate in 2013. He represents District 21 which includes portions of Cherokee and Fulton counties. Senator Beach is the Chairman of the Transportation Committee. He is also a member of the Economic Development, Higher Education and Science and Technology committees.

Senator Beach currently serves as the President and CEO of the Greater North Fulton Chamber of Commerce, leading the fourth largest chamber in the metro area. Sen. Beach has played an integral role in helping North Fulton grow and prosper in his 24-plus years in Atlanta. During his tenure with the Chamber of Commerce, membership of top level executives and CEO’s (Chairman’s Circle) increased by 60 percent, and commerce retention developed from 67 to 82 percent annually.

Senator Beach served as the Chairman of the Public Private Partnership Committee (P3 Committee). Under his leadership the P3 Committee was able to acquire key local transportation projects approved for Cherokee and North Fulton. Sen. Beach was elected to the Board of the GDOT by state legislators from the 6th Congressional District in 2008. In 2001, Governor Sonny Perdue appointed Sen. Beach to the board of Georgia Regional Transportation Authority (GRTA). In 2008, he was selected to chair one of GRTA’s most important committees – The Land Development Committee. In this role, Sen. Beach is responsible for leading a review of every significant development brought before the 16-county area that GRTA serves.

Closer to home, Senator Beach is the President, CEO, and one of the founders of the North Fulton Community Improvement District (CID). Under his leadership, the North Fulton CID has invested more than $2 million to help bring more than $30 million in new infrastructure for the District area. Senator Beach is a member of numerous community boards including the Regional Business Coalition, Grady Hospital Board of Visitors, the Greater Metro Atlanta American Heart Association, the Georgia Association of Chamber of Commerce Executives, Encore Park and the Historic Roswell Convention and Visitors Bureau. Senator Beach received an undergraduate degree from Louisiana State University and a Masters in Business Administration degree from Centenary College. He is also a graduate of the Regional Leadership Institute and a former member of the Alpharetta City Council and the Alpharetta Planning and Zoning Commission. He and his wife, Shuntel, have two children and have lived in Alpharetta for the past 24 years

Kevin Tanner has spent 27 years in public service. He is serving in his fourth term as a State Representative for District 9, which includes Lumpkin County and parts of Dawson and Forsyth counties.

A committed family man, Kevin has been married to the former Stacie Pickering for more than 20 years. Stacie is a first grade public school teacher, and they are the proud parents of three beautiful daughters, Kaitlyn, Abbie and Chloe. All three of their daughters attend public school. A man of faith, Kevin serves as a deacon and adult Sunday school teacher at Bethel Baptist Church, where his family has attended church for seven generations.

Griff Lynch has been Executive Director of Georgia Ports Authority since 2016.

At the Georgia Ports Authority, they are laying the foundation for a future in which Georgia’s deepwater ports are even more powerful engines for economic development.

Infrastructure investment is a vital facet of their mission to accommodate growing trade, empower entrepreneurs and strengthen industries.