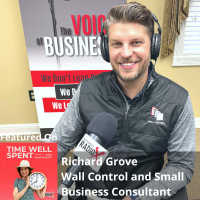 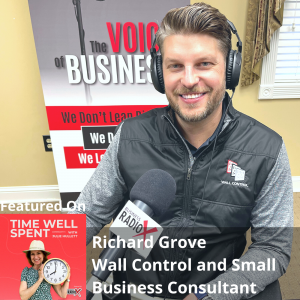 Richard Grove, COO at Wall Control and a Small Business Consultant, joined Julie to talk about the history of Wall Control, what a metal pegboard system is and how it helps to organize, his other projects, and more.

After the interview, Julie shared a Quick Tip to remind you that asking for help is one way to avoid hustling all the time.

Time Well Spent with Julie Hullett is presented by Julie Hullett Concierge, LLC and produced by the North Fulton studio of Business RadioX®.

Richard Grove’s background is in engineering but what he enjoys most is brand building through relationships and creative marketing. Richard began his career with the Department of Defense as an engineer on the C-5 Galaxy Engineering Team based out of Warner Robins. While Richard found this experience both rewarding and fulfilling, he always knew deep down that he wanted to return to the small family business that originally triggered his interest in engineering.

Time Well Spent with Julie Hullett features stories from busy professionals who have created more time to do what they love. Every other week, your host and personal concierge Julie Hullett speaks with entrepreneurs, community leaders, and influencers to answer the question: What would you do if you had more time?

Julie Hullett is a personal concierge and entrepreneur in Nashville, TN. She founded Julie Hullett Concierge, LLC in 2011 to give people their time back so they can do more of what they love. No stranger to big ideas and pursuing passions, Julie left corporate America to create her business. She capitalized on her skills—multi-tasking, attention to detail, and time management, to name a few—to build a successful business that gives back. Her clients enjoy ample free time. They’ve traveled more, spent more time with those they love, and have even created their own businesses.