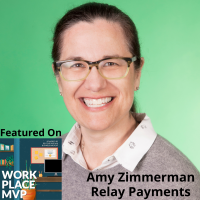 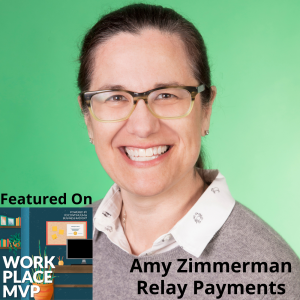 In a wide-ranging conversation, Amy Zimmerman, Chief People Officer at Relay Payments, and host Jamie Gassmann discussed best practices for retaining talent. They covered incentives, rewards, and recognition, the need for companies to keep abreast of market conditions, the value of stay interviews and what happens when they go wrong, talent retention methods which go beyond compensation, and much more.

During the show, Amy referenced a recent interview she gave on stay interviews. You can find that interview by following this link.

Workplace MVP is underwritten and presented by R3 Continuum and produced by the Minneapolis-St.Paul Studio of Business RadioX®.

After years of gaining a profound understanding of the ingrained payment problems in the logistics industry, co-founders Ryan Droege (CEO) and Spencer Barkoff (President) ultimately shared the vision of building the supply chain and logistics digital payment network of the future.

Now, Relay is a fast-growing, venture-backed fintech company, which raised $100 million in investment funding to fully support the goal of spearheading the industry transformation to digital, contactless payments, ensuring America continues to run during COVID-19 and well beyond.

As a result of the immense expansion, Relay has grown exponentially, boasting a workforce of 100+ across 12 states; all focused on building a customer experience unlike any other while modernizing age-old payment processes in the supply chain industry.

Relay’s customer-centric approach has entrusted the company to process more than 250,000 transactions every month, working with the largest carriers, freight brokers, and 3PLs across 50 US states and Canada, ensuring their products get to shelves quickly for consumer consumption.

Amy joined Relay Payments in 2020 to support their explosive growth plans. She was hired to establish their people function and build it from the ground up. During this time, they have grown from fewer than 10 team members to over 120 globally. Relay Payments is a mission-driven, Series C, venture-backed start-up in the fintech space, headquartered in Atlanta, GA. They are building a contactless payment network in the transportation and logistics industry.

Amy co-founded PeopleCo. to be a strategic partner for founders and a growth catalyst for companies on the rise. Central to her work, of course, is the development and nurturing of a company’s culture. Whether the focus is on foundational elements, like defining core values and communication practices or developing more mature programs to support organizational effectiveness like performance development and engagement initiatives, it’s all in service to ensure that the culture is intentional and aligned with the company’s growth objectives and financial goals.

In her previous life, as chief people officer for Kabbage (recently acquired by American Express), Amy was responsible for building the company’s award-winning culture, driving engagement, and guiding all people strategy initiatives. She oversaw the integration of M+A teams to build and grow capabilities across a diversity of cultures and geographies. Before that, she worked for VSI as a recruiter, people leader, and culture ambassador prior to their acquisition by TransUnion.

She graduated from the University of South Florida with a completely irrelevant degree in Criminology.

Every day, around the world, organizations of all sizes face disruptive events and situations. Within those workplaces are everyday heroes in human resources, risk management, security, business continuity, and the C-suite. They don’t call themselves heroes though. On the contrary, they simply show up every day, laboring for the well-being of employees in their care, readying the workplace for and planning responses to disruption. This show, Workplace MVP, confers on these heroes the designation they deserve, Workplace MVP (Most Valuable Professionals), and gives them the forum to tell their story. As you hear their experiences, you will learn first-hand, real-life approaches to readying the workplace, responses to crisis situations, and overcoming challenges of disruption. Visit our show archive here.